In 1986 Virgin Games Ltd produced a Dan Dare, Pilot of the Future game, developed by the "Gang Of Five" (Dave B. Chapman, Martin Wheeler). Somewhat different versions were created for three platforms: the Sinclair Spectrum, the Amstrad CPC and the Commodore 64. Rather than being based on the new incarnation of 'Dan Dare' then running in the "new" Eagle, the game (and particularly the packaging) owed more to the original 1950s Eagle character created by Frank Hampson, who had died a year earlier. The instructions included the following:

This game is dedicated to the memory of Frank Hampson, the creator of Dan Dare who sadly died on 8th July 1985. We hope he would have approved of our treatment of his characters.

This "speedrun" of Dan Dare, Pilot of the Future, recently posted by "tehvalli" on YouTube gives a flavour of the Spectrum version:

If that whetted your appetite, and you want to play the game, there are emulators that run under Windows and other operating systems, and you can download the games to run on them. (See The World of Spectrum). Here is a link to download a Spectrum emulator, called ZX Spin, that runs under Windows (from 95 to XP I understand - I've run it under XP): download ZX Spin. Just download and unzip the files into a folder of your choice. The emulator should run by clicking on the ZXSpin.exe application. There is a Help file in the application.

To download the Spectrum version of Dan Dare to run on the emulator, click on the appropriate link in this List of Spectrum Games beginning with D. (Sorry, creating direct links to the file doesn't work). The original instructions for Dan Dare are here. And if you need a map, view one here.

The game was very successful, and led to two further (somewhat less successful!) games being developed: Dan Dare II: The Mekon's Revenge and Dan Dare III: The Escape. You will find download links for those in the same list you found Dan Dare, Pilot of the Future.
NOTE: Sorry, Eagle Times cannot provide any more help with installing, configuring or running the emulator or the games on your particular computer, so please don't ask!
Posted by Will Grenham at 16:55 2 comments:

For aficionados of Eagle's original 'Dan Dare, Pilot of the Future' the latest issue of Rod Barzilay's Spaceship Away, is just out. Spaceship Away is a three times a year, full colour, 44-page A4 glossy magazine that publishes newly created 1950’s Eagle style 'Dan Dare' strip stories along with humorous strips, articles and text stories.
Issue 14 continues the 'Dan Dare' serial strips 'The Green Nemesis' (written by Rod Barzilay; drawn by Don Harley* and Tim Booth),'The Gates of Eden' (written and drawn by Tim Booth) and 'Rocket Pilot' (written and drawn by Keith Page). There is also the text serial 'Murder on Mars' by Denis Steeper (which is illustrated on the cover by Martin Baines); and a new full colour 'Dan Dare' centre-spread by the renowned Scottish artist Ian Kennedy, who drew 'Dan Dare' in the "new" Eagle in the 1980s. The humorous strips are 'Dan Bear' (by Andy Boyce), 'Mekki' and ''Our Bertie' (both by Ray Aspden), and 'Dan Dire' (by Eric Mackenzie).
In addition to the 'Dan Dare'-themed material Spaceship Away also includes a couple of other SF strips: Sydney ('Jeff Hawke') Jordan's 'Hal Starr' and a reprint of Charles Chilton's 'Journey into Space' (drawn by Ferdinando Tacconi) that originally appeared in Eagle's rival paper Express Weekly in 1956. Eagle readers will remember that Chilton, apart from creating the original 'Journey into Space' serial for BBC radio, was also the author of 'Jeff Arnold and the Riders of the Range' in Eagle. The 'Riders of the Range' was itself originally created for radio by Chilton.

For further details of Spaceship Away, including how to subscribe, please go to the Spaceship Away website. Some direct links to examples of some of the strips (from previous issues) are provided below:

* Don Harley is one of the 1950s Eagle 'Dan Dare' studio artists (acknowledged by 'Dan Dare'-creator Frank Hampson as "The second best Dan Dare artist").
Posted by Will Grenham at 22:00 No comments: 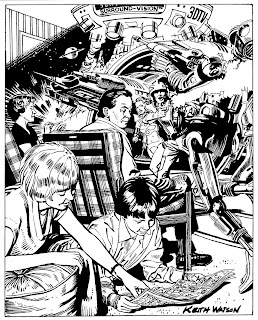 Keith Watson (1935 – 1994) was born in Ormesbury, Middlesborough. In 1950, at the age of fifteen, he was inspired by seeing Frank Hampson’s ‘Dan Dare’ in Eagle and he became an instant fan. Although he had received no formal art training, in 1957 or early 1958 he submitted what was to be a successful job application to Frank Hampson, a pastiche front page of Eagle showing, in strip form, Dan & Co.’s reaction to the arrival a new artist – himself. Although there was no vacancy, Hampson was suitably impressed, and in 1958 Keith joined the ‘Dan Dare’ studio team as an assistant artist. After Hampson left in 1959, and Frank Bellamy took over as lead artist on ‘Dan Dare’, Keith continued along with the remainder of Hampson’s team but, dissatisfied at the way of working, he too left in 1960 - to draw ‘Captain Condor’ in Lion.
Two years later, he returned to Eagle as the sole artist on ‘Dan Dare’, and continued until early 1967 when Eagle began reprinting old ‘Dan Dare’ strips. After Eagle, Keith drew strips for a number of comics: ‘Sky Shark’ in Topper, ‘The Space Girls’ in Tina and Princess Tina. In 1968 he drew ‘Captain Scarlet and the Mysterons’ in TV21, and the next year, the title strip in Joe 90. In the late 1970s, he took over the ‘Roel Dijkstra’ football strip for a Dutch publisher. In 1989, he revived the “original” ‘Dan Dare’ for Fleetway's “new” Eagle, after which, in the early 1990s, he drew for Thunderbirds: the Comic. His final work, commissioned by Eagle Society member Rod Barzilay, was for a new “old school” ‘Dan Dare’ strip. After producing some designs and the first page, Keith was diagnosed with cancer. The opening page of ‘The Phoenix Mission’ (which appeared, posthumously, in the first issue of Spaceship Away in 2003) was to be the last he drew.

The illustration is a self portrait of Keith sent in by Richard Sheaf, who informs us it is from Strips '80, the handook of the Society of Strip Illustration. It is part of a directory of SSI members and was intended as an introduction for those who attended the SSI conference in November, 1980.

In 1987, the Lowe Howard-Spink Marschalk advertising agency created a campaign that included three television commercials for the Mobil Oil Company to promote the latter's fuel products. Long after the demise of the original 'Dan Dare' from Eagle, these affectionately parodied the Frank Hampson model, rather than later re-incarnations. The commercials were filmed at Shepperton Studios by production company Lewin and Watson. In this parody it is Digby who is the brains behind the team, extolling to a rather dim Dan Dare the virtues of Mobil’s synthetic oil, lead-free petrol and diesel.
Number 1: Rocket to Nowhere


These videos were originally posted on Google Videos by Peter Inns who has three Dan Dare related sites at www.dandare.org, www.dandare.net and www.dandare.net.uk
Posted by Will Grenham at 10:45 3 comments: