IN AND OUT OF THE EAGLE 7 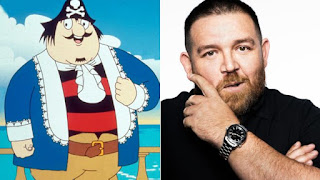 You don’t tend to bump into people called Horatio every day, but no less than three Horatios featured in their own strips in Eagle. First was John Ryan’s Captain Horatio Pugwash, who appeared from the first issue until the nineteenth in 1950. The next was the real life Horatio Nelson, who was featured in the back page serial The Great Sailor in 1956-57 and finally there was C.S. Forester’s fictional naval hero, Horatio Hornblower, whose adventures were adapted for Eagle in 1962-63. Of course all these Horatios are linked by the sea and all captained ships at some time in their lives. Nelson was one of Britain’s greatest heroes of the Napoleonic wars and Eagle included no less than three fictional strips set during this period. Only the wild west and contemporary times were featured more. First was Jack O’Lantern, about a young boy in the later years of the conflict, which ran in Eagle from 1955-60. Then came the already mentioned Hornblower stories and finally in 1964, Johnny Frog, about another young boy, this time set around the time of the Battle of Trafalgar. Both Jack O’Lantern and Johnny Frog were written by George Beardmore.

Pugwash, created by John Ryan appeared in semi-animated cartoons made by Ryan himself for the BBC and became a television and literary success. He is soon to appear in a live action feature film starring Nick Frost as the popular pirate. 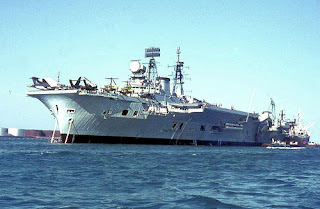 Staying with the sea, Eagle forged strong links with the aircraft carrier H.M.S. Eagle, including featuring her as a cutaway drawing. H.M.S. Eagle was launched in 1946 and was the fifteenth Royal Navy ship to bear the name. Commissioned in 1951 she saw war service during the Suez Crisis of 1956. After service all over the world, she had an extensive refit in 1959 and another in 1966, finally being withdrawn from service in 1972. She was subsequently moored in the River Tamar, where she was held in reserve until 1976, although she was stripped for essential parts needed by H.M.S. Ark Royal. She was finally scrapped in 1978. I was lucky enough to see the ship’s brass name plate on a visit to the Royal Naval Dockyard Museum at Devonport a few years ago and one of her anchors can be seen at the entrance to the Fleet Air Arm Museum at Yeovilton.
Posted by Unknown at 15:47 No comments:

A major exhibition of Frank Hampson's work began this weekend at the Atkinson Arts Centre in Southport. The official opening is on Thursday September 20th and the exhibition will run until March 2019. Original Dan Dare artwork is on display as well as models and film of Frank's studio. Original art from his Ladybird books and his Road of Courage strip is also displayed.
Posted by Unknown at 10:04 No comments:

IN AND OUT OF THE EAGLE 6 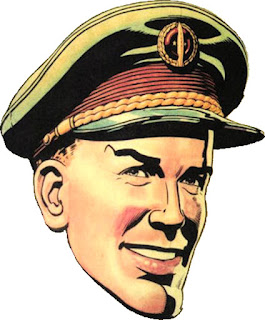 It’s a sobering thought but the first recorded Dan Dare adventure was set at least thirty years ago! This was Moon Run in the EAGLE Annual for 1961, which includes Dan’s first meeting with Digby and consequently must take place before the Mars 1988 story which was featured in the 1952 Annual where Dan and Digby already know each other. Born in 1967, Dan would now be fifty one, although having spent the best part of a decade in suspended animation, travelling to and from Cryptos, he would now effectively be about forty. With his return in 2012 and the Mekon’s invasion of Earth defeated, by 2016 the Pescod threat would probably be over too and by now Dan and friends may well be involved in the Terra Nova adventure, meaning we’ve reached the end of the Frank Hampson era in real time! At least Frank Bellamy, Don Harley, Eric Eden, Keith Watson and David Motton’s work should keep us going for a few more years, but none of us will be around in 2177 when Dan is revived with a new face for his 2000 A.D. adventures!

Most sobering of all though is the fact that in our version of reality, the possibility of a colony on Mars as depicted in Mars 1988 is still many years away. We have yet to land a man on the planet. But to end on a happier note, at least we aren’t likely to be invaded by robots controlled by intelligent reptiles from Venus any time soon, either.
Posted by Unknown at 08:36 No comments:

IN AND OUT OF THE EAGLE 5 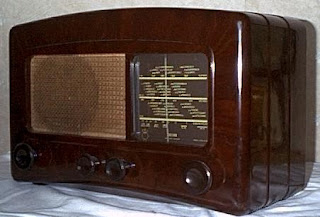 When EAGLE began, radio was still king and two of its most popular strips originated as BBC radio series. PC 49 began in 1947 and 112 half hour adventures of the London policeman, played by Brian Reece, were made before the programme ended in 1953. PC 49’s adventures began in the first issue of EAGLE and ran until 1957. The radio adventures of Riders of the Range, featuring Paul Carpenter as Jeff Arnold, began in 1949 and six serials were broadcast between 1949 and 1953, with the EAGLE version beginning in December 1950 and running till March 1962. Unlike strip versions of later television series in other comics, which were invariably notably inferior to their originals, the EAGLE versions of both these radio series compared most favourably, probably because they were written by their creators and illustrated by excellent artists in John Worsley and Frank Humphris, who made the strips their own. Their success is evidenced by the fact that both outlasted their radio counterparts by several years.

Of the characters who were specially created for EAGLE, Dan Dare featured in a hugely successful series of radio serials on Radio Luxembourg between 1951 and 1955, where he was played by Noel Johnson, who had originated the popular Dick Barton character in 1947, for BBC radio. The BBC produced their own four part Dan Dare serial in 1990 to mark EAGLE'S fortieth anniversary, which featured Mick Brown as Dan and Donald Gee as Digby. In 1954, EAGLE began its own promotional programme on Radio Luxembourg, called Spread Your Wings and this featured a six part Luck of the Legion serial, narrated by Norman Shelley as an old legionnaire. Sergeant Luck also appeared on the commercial Springbok Radio in South Africa in 1979 in his own series, written by his creator Geoffrey Bond, twenty years after the strip ended in EAGLE.
Posted by Unknown at 16:34 No comments:

IN AND OUT OF THE EAGLE 4 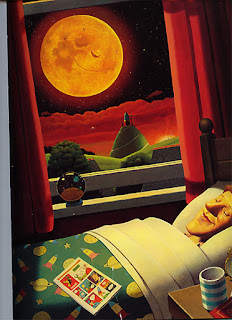 Eagle turns up in some unexpected places. In Simon Bartram’s children’s picture story book Man on The Moon, first published in 2002, set partly on the Moon and partly on an Earth highly reminiscent of the 1950s, the hero ‘Bob’, who travels daily to the Moon to show visitors round is shown with a copy of Eagle on his bed as he sleeps at the end of a busy day. The book proved a great success, winning the Blue Peter Book of the Year Award in 2004 and inspiring two picture book sequels and a series of story books about the character for older children.
Posted by Unknown at 22:07 No comments: