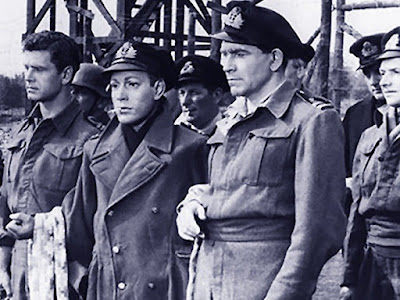 Two contributors to EAGLE had been prisoners of the Germans during the War and both recalled their experiences in significant post war films. Guy Morgan, who wrote the Storm Nelson strip for EAGLE, using the nom de plume of Edward Trice, wrote The Captive Heart, which was made just a year after the War and was filmed in the actual camp where he had been held. Although the central plot of this film is fictional, it focuses on a large group of characters and convincingly conveys the experiences of prisoners of War. Morgan also worked on the script of Albert R.N. (1953) which is a fictionalised account of a real event that had involved another EAGLE contributor, the artist John Worsley, who illustrated The Adventures of PC 49 from 1951 until 1957. As a prisoner, Worsley made a dummy to fool the Germans at roll call, enabling a prisoner to escape without being missed. (See above). The original 'Albert' dummy did not survive the War, but Worsley made another one for the film and this can still be seen in the Royal Naval Dockyard Museum in Portsmouth. 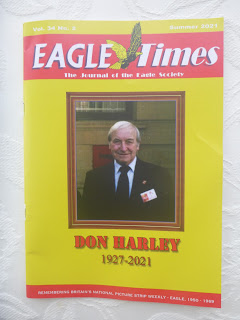 The latest EAGLE Times is out now. It includes tributes to the late Don Harley and the Duke of Edinburgh and articles about the back page biography of Sir Walter Raleigh and the Riders of the Range strip The Heir of Duncreiff. Dan Dare features in articles about his Phantom Fleet adventure and Frank Hampson's studio ideas book. There is also a feature about how the EAGLE Book of Cars and Motorsport inspired some young readers to restore a jeep and the final instalment of the latest Archie Willoughby adventure The Case of the Plastic Cowboys. Details of how to join the Society and obtain copies are on the right.
Posted by Jim Duckett at 10:15 No comments: