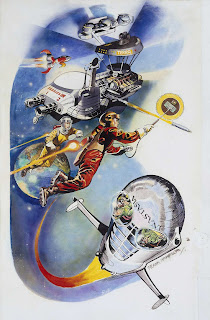 The winners of the Visit London Awards 2008 were presented at the Royal Albert Hall on 27th November. The Science Museum, which among its many attractions is currently exhibiting 'Dan Dare and the Birth of Hi-Tech Britain', won 'Gold' as the Visitor Attraction of the Year. The award recognises the Science Museum's appeal to adults and children, with its world-class collections, exhibitions and events.

The 'Dan Dare and the Birth of Hi-Tech Britain' exhibition has certainly given the museum a boost. Not only has it provided an excellent exhibition (see the review at our earlier post) but it has brought the museum additional publicity through press exposure. For example, apart from its coverage when it launched back in April, 2008, The Times has since chosen to list the exhibition among its Top Five Museums on at least five occasions.

David Britton has provided a quote from John Liffen, who is a co-curator of the exhibition with Professor Andrew Nahun. The following came in response to David's question on the how the exhibition was going:

As you know, we had a good press reaction and an independent study thought that the value to the Museum of the exposure was high. I quote from Andrew Nahum: ‘It was done by an able PR professional and it rates value of every mention according to size of the article and each paper or magazine's advertising rate. There is also an industry convention multiplier reflecting the fact that editorial material is far more influential than paid for advertising and “can't be bought”. According to these calculations, the Science Museum would have had to spend almost £700k to achieve the same presence in the media with “paid for” marketing. Of course, this publicity contributes to public perceptions of the whole Museum and not just to the Dare show.’ “Aside from that, the exhibition was well-received internally (which matters a lot!) and the visitors seem to like it. I haven’t yet seen a qualitative visitor survey, but I hope we shall have done something on those lines. People are stimulated to write in with notes of appreciation about the whole exhibition, but often they focus in on just one item which has particularly caught their attention ... I haven’t heard of any adverse comments, and perhaps that’s a good test, too”

The Exhibition runs until October 2009, so there is still plenty of time to see it, if you haven't already.
The picture (from the Science Museum's Dan Dare Exhibition press pack) shows one of the murals drawn for the Museum in the 1970s by Frank Hampson, Dan Dare's creator.
Dan Dare is © The Dan Dare Corporation Ltd.

Footnote: Those interested in memorabilia might like to note that the Science Museum now has sets of 'Dan Dare Exhibition' tie-in souvenir postcards and notepads, 'Dan Dare' (and Mekon) T-shirts (small and medium only, unfortunately!) and badges, and some very attractive 'Dan Dare' spaceship LED keyrings.
Posted by Will Grenham at 17:07 1 comment: