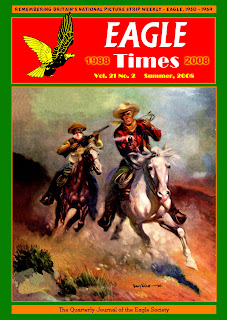 Summer 2008 Contents
The picture on the front of this issue of Eagle Times is from Eagle Riders of the Range Annual 1961 and is by Harry Bishop.
Posted by Will Grenham at 15:00 No comments: 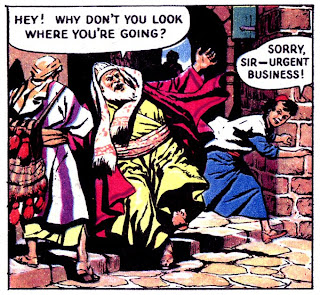 Giorgio Bellavitis (1926 - ) was born in Venice. As a teenager during World War II, he was a member of the anti-Nazi resistance movement and was imprisoned for several weeks with Mario Faustinelli and Alberto Ongaro. The three friends invented a costumed righter-of-wrongs called ‘L’Asso di Picche’ (‘The Ace of Spades’). After the war they set up a publishing company, gathered a number of artists and writers together to form the Grupo Veneziano (Venetian Group), and launched a magazine called Albo Uragano (White Hurricane), which later became renamed, (after its lead strip) Asso di Picche. The strip was pencilled by Hugo Pratt and inked by Bellavitis and Faustinelli. After the revamp, one of the first new strips was ‘Junglemen’, the first episode of which was drawn by Bellavitis, who then drew ‘The Adventures of Robin Hood’ under the pseudonym George Summers. After Asso di Picche folded in 1948, the majority of Bellavitis’ work until 1954 seems to have been for Il Vittorioso (The Conqueror). His strips included ‘I Cavalieri del Corvo’, ‘Acqua Cattiva’, ‘Il Palio di Siena’, and ‘Amburgo 1947’. Early(?) in this period he also created ‘La Strada Senza Fine’ (‘The Road Without End’), for Corrierre dello Scolaro.
In 1954, Bellavitis moved to England, and some time after, he was instrumental in introducing the Italian illustrator Rimaldo D’Ami (Roy Dami, founder of the Damy Agency) to Britain. He was the therefore first of many Italian comic strip artists to be published in Britain.

Bellavitis’ first strip after arriving in England was ‘Paul English’ for Swift. He then drew ‘Mark, the Youngest Disciple’ to a script by Chad Varah, his finest work for Eagle. Bellavitis stood in for Richard Jennings on two complete ‘Storm Nelson’ adventures, the first of which was set in his place of birth*. He also drew for Eagle Annual and Swift Annual, including the illustrations for a text story ‘The Winged Devils - a tale of the Ancient Vikings’ in Swift Annual No 2. He worked for a short time on Express Weekly, drawing ‘Rodney Flood’, and he is known to have done some illustrations for the Sunday Pictorial Children’s Annual. In 1956 he helped out on Eagle’s ‘Jeff Arnold in Riders of the Range’. His work also appeared in Playhour and Treasure. In 1958, however, he returned to Italy to pursue a career in architecture.

Professor Giorgio Bellavitis is now actively involved in the conservation and restoration of Venice, advising UNESCO and other bodies. Girogio Bellavitis' projects in Venice have included, in the 1980s, the garden design and landscaping for Palazzo Venier dei Leoni, the home of the Peggy Guggenheim Collection, and from 1997 to 2005 direction of the restoration of Ca’Foscari. Giorgio Bellavitis has written and co-authored a number of books and is the author of ‘Venice: a City in the Sea of History’, which prefaces the Heritage Guide to Venice published by the Touring Club of Italy.

The picture above is from 'Mark the Youngest Disciple', Eagle, 12th November, 1954.

Michael Alan Charlton was born in Poole, Dorset, and studied at Poole School of Art and Edinburgh College of Art. An illustrator in black and white and colour, his only know contribution to Eagle was the single black and white picture shown here, which he drew to illustrate an Arthur Catherall story called ‘Ten Days to Christmas’ - “a short story of Ojibwa fur trappers in the land of perpetual snow”. It appeared, appropriately enough, on 14th December, 1951 (in Eagle Vol 2 No 36). He also illustrated ‘Professor Kitto and the Magic Ray’ in another Eagle-associated publication: Swift Annual No 2 (Hulton Press, 1955), for which he drew three black and white pictures. Charlton illustrated dozens of books from 1954 through 2003, including the children's book Wheezy (Bodley Head, 1988), which he also wrote. He lived in Dorset, and died there after a long illness on 23rd June, 2008. 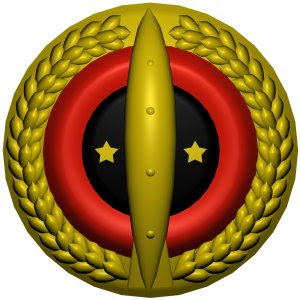 Out soon, in case you missed the news at down the tubes and elsewhere, a new piece of licensed Dan Dare* merchandising will be available very soon from Termight Replicas - Dan Dare's Spacefleet Cap Badge.

The illustration shows Chris Weston's concept art for the badge, which is based on Frank Hampson's original 1950s design. Readers of Eagle Times will have seen the article on Chris' Dan Dare action figure designs in the Spring 2008 issue, which followed up on information originally posted on Chris Weston's blog.

Cast in zinc alloy and gold plated with red and black enamel circles on the front, the badge will have a diameter of 45mm and a maximum thickness of 4mm (not including the brooch pin). The enamel will be applied to recesses in the metal, so the red and black areas on the actual badge will be flat, rather than as shown in the concept art.

The badge can be ordered from Termight's site. The preorder price is £9.95, and they badges should be ready by the beginning of July, 2008.
*Dan Dare created by Frank Hampson © The Dan Dare Corporation Ltd. 2008
Posted by Will Grenham at 16:00 No comments: