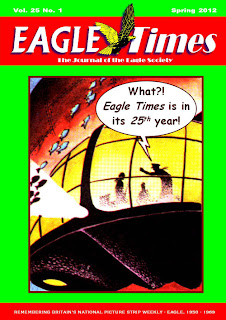 * Note: News of the death of Bruce Cornwell in early March reached us after this issue of Eagle Times went to press.
Posted by Will Grenham at 00:00 No comments: 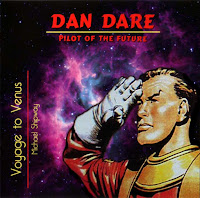 Michael Shipway's Voyage To Venus, published by MSL Music, is an electronic music album inspired by the first 'Dan Dare, Pilot of the Future' story (which began in Eagle No. 1 in 1950). It is available on CD and comes  in a standard CD "jewell" case with a 12-page illustrated booklet.

The 10 tracks mix electronic melodies with selections of dialogue from the BBC's 1990 (40th Anniversary) radio serial adaptation, each track representing a key scene from the story. The music was created by use of hardware synthesizers, with occasional electric guitar. The booklet is illustrated with scenes from the original Eagle cartoon strip.

The tracks are listed below. The links are to samples on the MSL website.

To read more about the creation of the album you can look here.

While I wouldn't claim that electronic music is my "usual cup of tea" I rather enjoyed it, my £10 investment was far from wasted, and I recommend the album to all fans of 'Dan Dare', but suggest you listen to the samples. If you like what you hear, you can order the full CD from the MSL Music Shop. The album is not available for download (since the booklet is seen as an integral part of the product).

Incidentally, the title Voyage to Venus seems to have been first formally appended to the first 'Dan Dare' story when Titan Books began reprinting the series in 2004. Previously it had been known among fans (variously) as "the first adventure", "the first Venus story" or "the first Venus series". Titan's lead in calling it Voyage to Venus was followed when Orion Publishing produced an audiobook version of the first half of the story in 2008. I understand the CD version of that is no longer available, though it is available as an audio download. A sample can be heard here. (Orion, please note: fans are still waiting for the second half!)

The BBC's 1990 adaptation of the story, by Nick McCarty, has been rebroadcast several times on BBC Radio 7 (since renamed Radio 4 Extra), the most recent being, I believe, in December 2007. It has not been officially released on CD, though unofficial copies can be found on the internet.
Posted by Will Grenham at 19:35 No comments:

Eagle and Dan Dare Commemorated on a Stamp 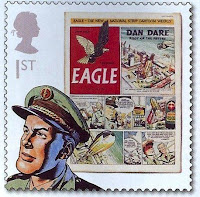 On 20th March 2012, Eagle and its leading character, Dan Dare, will be featured on one of a set of 1st class postage stamps issued by the Royal Mail. The Comics stamps issue comprising ten designs marks the 75th Anniversary of the first issue (in December 1937) of The Dandy (which is Britain's longest running comic) and some of the comics (and characters) that have since followed, including Eagle and Dan Dare.
The full set of ten stamps is shown below and includes:

More information on the Royal Mail website
Posted by Will Grenham at 16:42 No comments:

Sadly we have heard of the death, on 2nd March 2012, of one of the original artists who worked on the 'Dan Dare' strip, Bruce Cornwell.
Though born in Canada, A. Bruce Cornwell was raised as a child in California, USA, before coming to Europe to study art at Regent Street Polytechnic in London and the Académie Julian in Paris. During the Second World War he served in the British Merchant Navy. After the war he became a maritime artist and freelance illustrator, before joining the staff of Eagle in early 1950.
In an article written for Eagle Times in 1998 Bruce told how he came to work on Eagle, after answering an advertisement in a trade paper, presumably in late 1949. Although used to working solo, he then found himself as part of a team working on 'Dan Dare' with Frank Hampson and the rest of the studio team in the lean-to shed and former bakery which was the original studio in Southport. His main contribution to 'Dan Dare' was not so much on figure work, though he could do that if needed, but specialising in technical subjects: buildings, machinery, spaceships: "All the work stemmed from Frank's superb roughs and my reason for being there was to take over most of the drawing of machinery."
After objecting to the excessive working hours, Bruce left the studio some time during Dan Dare's first adventure (which, incidentally, ran for about a year and a half). Later,  after the team's move to the new studio in Epsom, Bruce returned under the promise that the work schedule would be less demanding. It wasn't, and after he was refused leave when the work began affecting his health, he left again.
In 1960, after Hampson's team had been broken up, he returned to work with Don Harley on four 'Dan Dare' stories, staying for two years until 1962, when Keith Watson took over.
In addition to 'Dan Dare', Bruce's contributions to Eagle included 'Ships Through the Ages', (some) 'Tommy Walls', and four cutaway drawings, all of nautical subjects. He contributed many of the illustrations, including a number of cutaway drawing designs, to Dan Dare's Spacebook (1953) and Dan Dare's Space Annual 1963. In addition to his work for Eagle he also drew 'Sammy In Space' (with Desmond Walduck) in Swift, 'Space Captain Jim Stalwart' in Junior Mirror, 'Danny Dare' (with Leo Baxendale) in Wham! and 'Journey into Space' (following Ferdinando Tacconi) in Express Weekly. The scope of his commercial art included book covers and line illustrations, the best known being those he did for the Kemlo and Tas children's science fiction series by E.C. Eliott.
By 1998, when he wrote for Eagle Times, he was "still working" but had retired from commercial work projects, dividing his time between painting and exhibiting, assisting his wife with her business and indulging his favourite hobby: maintaining and running a number of classic cars. Bruce was one of the Eagle Society's special guests at the Grail Centre, Pinner for our 13th Annual Dinner in 1999. More recently he had been persuaded to contribute a number of 'Dan Dare' themed painted illustrations to Spaceship Away, including the one shown above.
The news of Bruce's death arrived with us after the Spring 2012 issue of Eagle Times went to press. The issue includes an article by Jeremy Briggs on Bruce's cutaway drawings. We will be including an obituary in our Summer issue.
Posted by Will Grenham at 10:00 No comments: