Dan Dare, Pilot of the Future: A Biography (review) 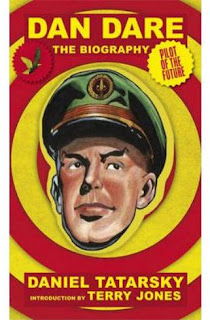 On first seeing the title of this book I was half expecting a biography of the character Dan Dare, written as if the alternate universe created by Frank Hampson, his studio team and their successors, might be real - something along the lines of what Philip José Farmer did (in 1972) for Edgar Rice Burroughs’ famous jungle character in Tarzan Lives! That idea remains for some future project, perhaps, but if the title of this book might be misleading, I am not about to criticize the book for what it is not.
Dan Dare, Pilot of the Future: A Biography (or Dan Dare: The Biography as the dust jacket would have it) is the story of the ‘Dan Dare’ strip in the Eagle - how it was created, developed, produced and eventually (all but) killed when Eagle ended. Although it (rather briefly) continues the story through the further incarnations of ‘Dan Dare’ to the present, and even anticipates a future movie, the overwhelming focus is on those Eagle years (1950 - 1969). It is written by Daniel Tatarsky, the editor of Orion Books’ other Eagle-related publications: Eagle Annual the Best of the 1950s Comic, Eagle Annual of the Cutaways, Eagle Annual the Best of the 1960s comic, and the 2011 Eagle Diary).
The book, hard-covered in red and with a colourful dustjacket, has around 250 pages of text with the occasional black and white illustration, plus another 64 glossy colour pages grouped into themes at intervals through the book and variously adorned with illustrations from archive copies of Eagle, studio photographs, Frank Hampson’s sketchbooks and roughs, and various pictures of ‘Dan Dare’ spin-off merchandising. The text includes an introduction (by Terry Jones), nine chapters, an appendix (summarizing all the ‘Dan Dare’ adventures from the original Eagle) and a bibliography. There is no index, reflecting perhaps that it is not all that mighty a tome.
As well as reading the main published works (Alastair Crompton’s The Man Who Drew Tomorrow, Sally Morris’ and Jan Hallwood’s Living With Eagles etc.), the author has talked (directly in some cases; via letter, telephone or e-mail in others) with a number of people associated with ‘Dan Dare’ and Eagle, including surviving former Dan Dare Studio team members Greta Tomlinson, Don Harley and Bruce Cornwell, plus Margaret Jackson (Frank Hampson’s sister), as well as with other Eagle and ‘Dan Dare’ enthusiasts (Alan Vince, Adrian Perkins, Rod Barzilay, et al) and to a number of people who were influenced by Eagle and ‘Dan Dare’. (At this point, perhaps I should declare that my own name is mentioned in the acknowledgements - though I'm sure my own contribution was quite modest!)   He also had access to Alan Vince’s 1974 interview with Frank Hampson, to Penny Spark’s 1978 interview with the same, and talked with Frank Hampson’s son, Peter - so plenty of opportunity to bring something new to the history. While bringing his own voice and thoughts to the proceedings, Tatarsky often quotes his sources directly, letting their voices illuminate the story.
While I have some familiarity with the subject matter, I did not read this book deliberately hunting for errors or discrepancies with other accounts (besides I do not count myself as an expert in the detail). Nevertheless I suspect that the colour section comparing characters drawn by different artists contains at least one error in the artist attributions. Also, the text implies (at the end of the fourth chapter) that Don Harley was the only other artist working on the strip with Frank Bellamy after Hampson’s departure in 1959, whereas (and it is obvious by looking at the strips produced at that time) there were various artists still at work. One artist, Gerald Palmer, doesn’t even get a mention.
Despite the criticisms mentioned above, I found it a very well written book - Tatarsky has a natural, easy style, making for relaxed reading. His book provides a sympathetic account of the story of ‘Dan Dare’ - from conception to resurrection, you might say. It should be an essential primer to anyone with an interest in the 1950/60s Eagle ‘Dan Dare’ and a good read even for those more familiar with the story. For anyone who has come to ‘Dan Dare’ after the 1960s, through 2000AD, the "new" (1980s) Eagle, the Titan Books reprint series, Spaceship Away, or even the Virgin Comics “remould”, the book provides a readily accessible primer on the ‘Dan Dare’ strip and a homage to the creativity, achievement, personal tragedy, influence and legacy of the original creators of an enduring British comic strip hero.