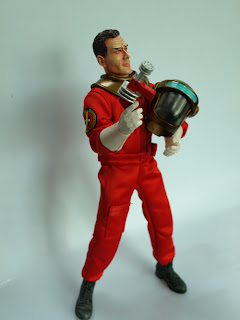 Scheduled to go on sale in March, 2010 (and just in time for the 60th anniversary of Dan Dare's first appearance in the Eagle), is the first of a possible series of Dan Dare Action Figures from Day2Day Trading. 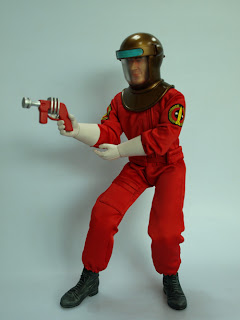 Thanks to Anthony Jeff for these pictures of what he calls the "first action figure prototype". Anthony has confirmed that the figure has been developed from the concept designs of Chris Weston, and which were featured in an article in Eagle Times magazine in Spring, 2008 (Eagle Times Vol 21 No 1) - however, we understand Chris' designs were for Underground Toys, so some further clarification might be needed?
The figures will be 12" high and feature Anthony's "own design Atom figure body". The March release is waiting for final packaging artwork and sign-off by the licensors.
When we have any further news (such as price, which has yet to be determined), we will let you know. Or keep an eye on the Day2Day Trading site. It's nice to see they are publicising Spaceship Away and Titan Books Dan Dare series under their Dan Dare News.
Posted by Will Grenham at 10:24 2 comments: