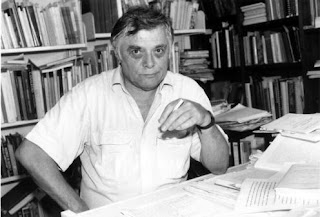 Giorgio Bellavitis  (1926 - 2009) was born and died in Venice, though he spent a number of years in England. Starting out as a comic book artist, but changing career to architecture, his reputation in his later years was for his contribution as an architect to the restoration of Venice.

After being held prisoner together by the Nazis during the Second World War, Bellavitis and his friends Mario Faustinelli and Alberto Ongaro later set themselves up as publishers and gathered more artists and writers to form the Grupo Veneziano (Venetian Group). Their first magazine, called Albo Uragano (White Hurricane), was later renamed Asso di Picche, after its lead strip, which was pencilled by Hugo Pratt and inked by Bellavitis and Faustinelli. After drawing the first episode of ‘Junglemen’, Bellavitis then drew ‘The Adventures of Robin Hood’ under the pseudonym George Summers. After 1948, when Asso di Picche folded, and until 1954, when he moved to England, he worked mainly on Il Vittorioso (The Conqueror). His strips in this period included ‘I Cavalieri del Corvo’, ‘Acqua Cattiva’, ‘Il Palio di Siena’, and ‘Amburgo 1947’.

In England, he was instrumental in introducing the Italian illustrator Rimaldo D’Ami (Roy Dami, founder of the Damy Agency) to Britain, and was the first of many Italian comic strip artists to be published in Britain via D'Ami's agency.

Bellavitis’ first English strip was ‘Paul English’ for Swift. He then drew ‘Mark, the Youngest Disciple’ to a script by Chad Varah, for Eagle. Bellavitis stood in for Richard Jennings on two complete ‘Storm Nelson’ adventures (which were was later reprinted in Italy as 'Kid Tempesta'), the first of which was set in his place of birth. He also drew for Eagle Annual and Swift Annual, including the illustrations for a text story ‘The Winged Devils - a tale of the Ancient Vikings’ in Swift Annual No 2. He worked for a short time on Express Weekly, drawing ‘Rodney Flood’, and he is known to have done some illustrations for the Sunday Pictorial Children’s Annual. In 1956 he helped out on Eagle’s ‘Jeff Arnold in Riders of the Range’. His work also appeared in Playhour and Treasure. In 1958, however, he returned to Italy to pursue a career in architecture.
For many years, and until his death, Professor Giorgio Bellavitis was actively involved in the conservation and restoration of Venice, advising UNESCO and other bodies. Giorgio Bellavitis' projects in Venice included the garden design and landscaping for Palazzo Venier dei Leoni, the home of the Peggy Guggenheim Collection, and from 1997 to 2005 direction of the restoration of Ca’Foscari. Giorgio Bellavitis wrote and co-authored a number of books and articles, including ‘Venice: a City in the Sea of History’, which prefaces the Heritage Guide to Venice published by the Touring Club of Italy. His death was reported on 21 May 2009 in Venice, the city that inspired him.

A fuller obituary and bibliography can be read on Steve Holland's Bear Alley blog.

Photo of Giorgio Bellavitis: Il Gazzettino
Posted by Will Grenham at 10:05 No comments: 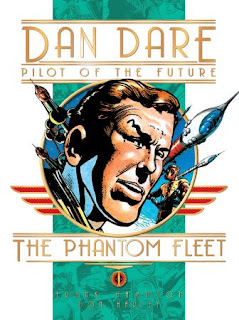 The latest in Titan Books' reprint volumes of the original Dan Dare series has recently been published. My copy arrived from Amazon.co.uk on 14th May, 2009.
The full list of published Dan Dare titles can be seen at the Titan Books website. Although the 10th story in the Dan Dare series, The Phantom Fleet is the 11th volume in Titan's series since the first (Venus) story and 'Operation Saturn' were each split over two volumes and 'The Ship that Lived' was appended to 'Reign of the Robots'. This book also includes the Dan Dare story 'Operation Plum Pudding', which originally appeared in Eagle Annual No 5. Thers is an Introduction by Jeff Wayne (composer of the award-winning musical version of War of the Worlds), and an article on the life and work of Frank Bellamy (Frank Hampson's successor on 'Dan Dare,), by Paul Holder.
With echoes of the first Dan Dare story, 'The Phantom Fleet' opens with a spaceship awaiting take-off. But, rather than the terrestrial "Headquarters of the Interplanet Spacefleet some years in the future", the scene is now "Spacefleet Base on the Moon, some years in the future...'  On board is Dan Dare, Chief Pilot of the Spacefleet, making a routine check flight. Take-off goes well, but the ship has to return to the Moon in an emergency when all Spacefleet communications are mysteriously jammed. Dan and Co. investigate, and discover a race of highly intelligent aquatic aliens, the Cosmobes, who are intent on Earth colonisation. But it turns out the Cosmobes are fleeing a much more aggressive foe, from their dying home world...
Die-hard Eagle fans may already have their collections of original Eagles and the Hawk Book reprints, but that shouln't stop them collecting these too! Beautifully produced in hardback with wrap-around dustjacket and in a convenient size, if you don't know what Dan Dare is about, or came to Dan Dare in one of his later incarnations, this series is the best place to start to find out about the original 1950s Frank Hampson creation.
First published beginning 25th April 1958, the opening episodes of 'The Phantom Fleet' shows some of the Dan Dare production team's best work.  It's good to see this series continuing. Although I appreciate there may be formatting issues with some of the later stories, I can only hope that Titan manage to complete the reprints of the whole series, rather than cut it short as the Hawk Books series did.
Although at a reduced size compared with the originals, with pages a little over A4 in size, this does make for a more handleable product. The more observant will notice that picture of Dan on the cover is different from that used for promotion before publication, which recycled an image of Dan from 'Operation Saturn'.
Posted by Will Grenham at 16:53 1 comment: