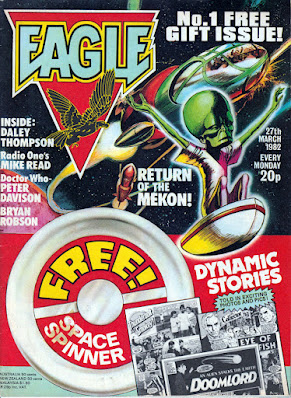 Today is the fortieth anniversary of the 1980s EAGLE, which was launched on March 20th 1982. Featuring the adventures of Dan Dare's great great grandson in strips illustrated by Gerry Embleton, Oliver Frey, Ian Kennedy, Carlos Cruz, John Gillatt and Manuel Carmona, it also included several photo strips in its first year, notably Doomlord, about an alien sent to judge humanity's right to exist. Unfortunately he judges us unfit, but is killed in an act of self sacrifice by the hero. A later Doomlord judges humanity favourably and becomes mankind's protector. Other strips included Sergeant Streetwise,about an undercover police officer and Manix, about an android working for British Intelligence. In a mostly successful effort to capture the spirit of the original EAGLE, it ran several features, such as a sports page and cutaway drawings of planes, tanks and other vehicles. From issue 79 the photo strips were wholly replaced by illustrated ones, with Doomlord, illustrated by Heinzl and then Eric Bradbury, continuing to be popular with readers. A later popular strip was Computer Warrior, in which a young boy was absorbed into his computer and forced to play computer games for real. Over the years EAGLE featured a wide range of strips. It ran school based stories, war stories, supernatural stories, sports based stories, superhero stories and even a western
EAGLE ran until 1994, absorbing several other comics during its life. It absorbed Scream in 1984, Tiger in 1985, Battle in 1988, Mask in 1988 and Wildcat in 1989. 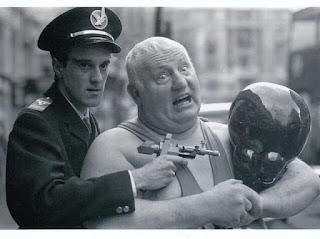 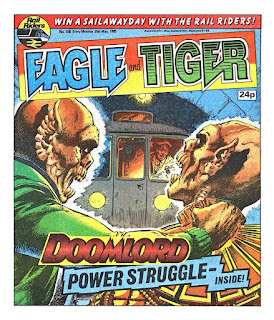 In 1989 Dan Dare's great great grandson's adventures were replaced with new stories of the original Dan. Keith Watson, who had illustrated the strip in the original EAGLE, drew two stories and part of a third, which was completed by Andrew Skilleter. Keith Page, John Ridgway and John M. Burns also illustrated new Dan Dare strips before David Pugh took over as artist, with some stories drawn by Jon Haward.
By the late 1980s, the heyday of British comics was well and truly over, as young readers embraced computer games. The number of other comics that were merged into EAGLE reflects this decline. In May 1991 EAGLE changed from weekly to monthly and apart from new adventures of Dan Dare and Computer Warrior, was mainly filled with repeats of popular strips. These included Charley's War, the celebrated First World War strip which had come from Battle weekly when it merged with EAGLE. Finally in January 1994, EAGLE's last issue appeared and the decline in sales of comics is made clear by the fact that there was no similar publication for it to merge into. Apart from 2000 A.D. which by then was aimed at a much older audience, EAGLE was the last survivor.
Writers who worked on the 1980s version included Pat Mills, John Wagner, Tom Tully, Alan Grant, Alan Hebden, Fred Baker, Scott Goodall, Gerry Finley-Day and Barrie Tomlinson. Contributing artists not mentioned earlier included Rex Archer, Mike Western, Robin Smith, Sandy James, John Cooper, Carlos Ezquerra, Jose Ortiz, Luis Bermejo, Mike Dorey and Mike White. The 1980s EAGLE is fondly remembered today by its readership and celebrated by several Facebook groups and a regular podcast called Where EAGLES Dare, run by Dave Ronayne and Pete Adamson. There was also an excellent fanzine, EAGLE Flies Again produced by Ian Wheeler in the early years of this century.
Posted by Jim Duckett at 09:40

I thought the 1980s EAGLE did a good job under sometimes difficult circumstances and it is certainly fondly remembered today. It introduced Dan Dare to another generation.