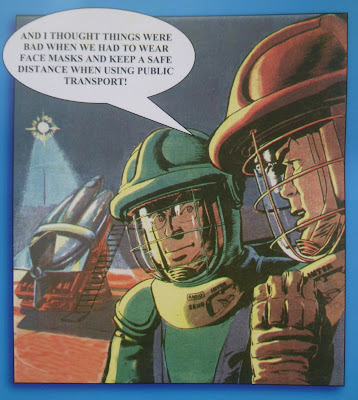 The first EAGLE Times of the new year is out now and now is the best time to subscribe for the four issues of 2022. The subscription remains at £30 and should be sent to Bob Corn at the address on the right. In this issue are articles about the back page strip The Great Explorer (David Livingstone), the Riders of the Range adventure Last of the Fighting Cheyenne, a Frank Hampson Studio feature about the Dan Dare story Rogue Planet, a look at the life of Roy Romaine, who was featured as one of EAGLE's Sporting Heroes, a short article about the EAGLE Club album Famous Men of Today and a feature about the Canadian Pacific Railway. Our former editor Will Grenham also reports on an interesting discovery of a short story published in EAGLE in 1950, which proved to be copied by its 'author' almost word for word from a story by Captain W.E. Johns. Finally there is part one of Steve Winders' new Archie Willoughby story, The Case of the Coveted Coffin, which isn't copied from anyone!