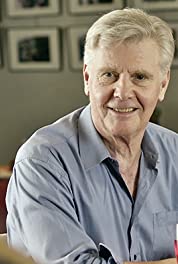 The 2002 C.G.I. Dan Dare TV series was heavily criticised by fans for changing Digby from a Wiganer to a cockney. Digby was voiced by the British actor Julian Holloway, son of born Stanley Holloway, who famously performed the monologue The Lion and Albert and many other humorous narrative poems in a accent. Julian himself could easily have portrayed Digby as a Lancastrian, having inherited his father’s talent for mimicking accents, but the misguided decision to relocate Digby came from the producers. Ironically, Greg Ellis, the actor who voiced Dan Dare in the series, actually comes from !

The new Eagle originally featured the adventures of Dan Dare’s great great grandson in its pages, but in a short flashback in 1983 it suggested that the original Dan had really been an R.A.F. pilot in the Second World War who travelled through a time warp to the 1990s. There seemed to be no point to this ‘revelation’ especially as it contradicted long established facts, but it was actually reported to tie in with the planned live action Dan Dare TV series, slated to star James Fox as Dan and Rodney Bewes as Digby. Bewes was a keen fan of Dan Dare and a member of the EAGLE Society. In his 1983 autobiography Comeback, James Fox commented on the role of Dan for which he had recently been cast, describing him as a Second World War fighter pilot who travels forward in time to become a space pilot.

Of course ATV's live action series was never made, but in a 2015 interview James Fox suggested that although he is now too old to play Dan, he could play Sir Hubert Guest instead! The aborted series was first mooted in the mid 1970s and in 1979, Gareth Hunt, fresh from his success in The New Avengers was reported to have been cast as Dan. Remarkably, in a poll conducted by 2000 A.D. comic, also in 1979, Gareth Hunt was the readers' choice to play their revisionist version of Dan Dare, as drawn by Dave Gibbons.

In 1991 a short TV pilot was made by Zenith Productions in an effort to interest TV companies in a Dan Dare series. Robert Bathurst played Dan and Geoffrey Hughes played Digby. Like Rodney Bewes, Hughes was also a keen fan and in his role as Eddie Yeats in Coronation Street was once shown reading a copy of the 1980s EAGLE. Unfortunately a series was not picked up.

Dear Jim.
Many thanks for keeping the blog alive and well!
Best regards
David Britton