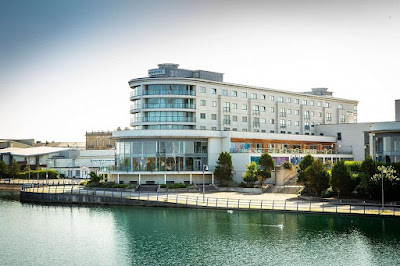 For those who gathered for the 2019 meeting in Scotland, it would have been unbelievable at that time to think it would eventually be some two and a half years before the seventieth anniversary of the launch of EAGLE could take place at Southport. Originally scheduled for April 2020, the Society finally gathered on the nineteenth to the twenty first of October 2021. The fact that it happened at all was due in no small measure to the persistence of Darren Evans, David Britton and Bob Corn in particular, who between them were determined that the ubiquitous virus would not prevail, despite the Mekon's efforts to ruin our special occasion. Needless to say, the Bliss Hotel overlooking the waterfront promenade at Southport came up to expectations and provided comfortable rooms, conference facilities and good food.

It was pleasing to see so many attending again, including the regulars, but noticeably this time, some not so regular made the special effort for the seventieth. Your scribe was particularly pleased to see Rod Barzilay again, known more to members for his past efforts on Dan Dare work, notably with his creation of Spaceship Away. However we were all very sorry to see Will and Anne Grenham depart early on the Wednesday morning due to Anne feeling unwell. We wish her all the best for a speedy recovery. Anne has contributed much work in the past for the Society as a proofreader for EAGLE Times and we all look forward to seeing her again next year.

The programme of events was designed to follow the usual pattern over the three days, not least with Steve Winders opening the proceedings on Tuesday evening with another of his wonderful monologues titled A Foreign Country. Steve's contribution in this respect is quite unique, being both clever and zany and has become almost the highlight of the Gathering. It will appear in the Christmas edition of EAGLE Times and is recommended reading. 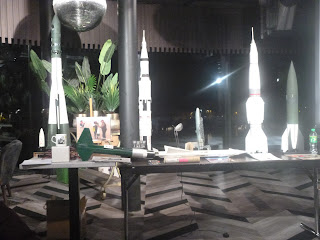 Peter Dyer of Southport completed the first day with a very 'EAGLE' type talk entitled Southport Beach and Russian Rockets. Peter is a member of the British Amateur Rocket Association whose local members attempt (with some success) to launch small home made rockets on Southport beach. He produced film of these attempts, showing some spectacular efforts and demonstrating a most unusual hobby. He also brought in several of his rockets. He had become interested when his father bought him a spacesuit when still at school and started launching rockets at thirteen, having been a regular fan of Journey into Space on B.B.C. radio and Dan Dare on Radio Luxembourg as a young boy. Apparently it is not against the local by-laws to launch rockets from the beach, but they take precautions against any problems through insurance! 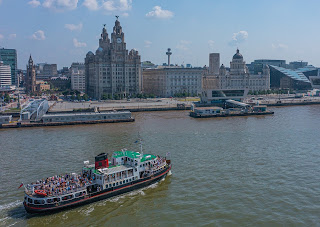 The main and only full day, on Wednesday was initially devoted to and outing by coach to Liverpool and a trip on the Mersey Ferry accompanied by the famous song by Gerry and the Pacemakers. Unfortunately it was a wet and murky day, with the views along the Mersey not as clear as normal. Nevertheless, it was an enjoyable experience. As soon as we arrived there was an excellent photo opportunity for our own resident photographer (Paul Napp) at the famous Beatles statue. Paul always manages to capture the key moments of any EAGLE meeting and this was one of those occasions when his expertise was on display. 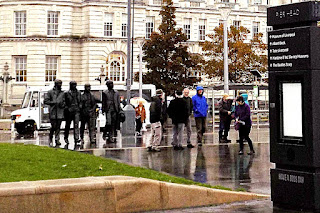 Darren had kindly given us all the afternoon off for free time to explore the area and museums in particular. Your scribe found it a nostalgic occasion, having passed through the area several times in the sixties and seventies on the way to the Isle of Man TT Races, although the docks area seemed unrecognisable from those days.

We returned to the Hotel for our seventieth anniversary dinner, complete with the celebratory cake. Our main talk was given by Keith Hick who is a civil engineer and architect, titled Donald Campbell and Bluebird K7. Our special guest was Gina Campbell who is the daughter of Donald and granddaughter of Sir Malcolm Campbell and herself a record holder of Ladies' Land and Water Speed Records in her own right. 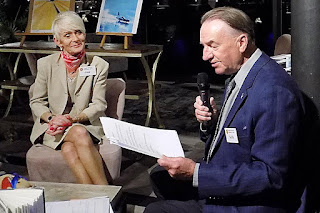 In a Q and A session she gave a vivid account of those record-breaking days involving Donald and the terrible day when her father was killed on Coniston in his last record-breaking attempt on water. Donald achieved both land and water speed records in the same year (1964) but was eventually killed in 1967. Gina is the last of the dynasty and it was not until 2001 that they managed to recover her father from the water and give him a church funeral. A truly engrossing story which went on to nearly midnight. We were all indebted to Darren for arranging such an interesting and famous speaker for the evening.

On the Thursday morning of our Gathering we were treated to three talks. The first was by our own David Britton, who usually speaks on Riders of the Range, but this time it was a talk entitled Storm Nelson - Talking Up a Storm. Although this particular strip was not the favourite feature of any of the EAGLE characters whenever a survey was constructed, it did appear in 44% of all the EAGLES, running from Volume 4 No. 26 until Volume 13 No. 9, comprising some eighteen stories and 433 episode, including one repeated in error! It was written by Edward Trice (Guy Morgan) and drawn by Richard Jennings and sometimes Giorgio Bellavitis, who David suggested drew clearer drawings. It was an interesting study by a member who writes regular articles for EAGLE Times on a variety of subjects. In conclusion, David informed us that the Society had received phone calls in the light of this special anniversary, from Colin Knight, Ron French and Isobel Ryan (the younger daughter of John Ryan).

The second talk of the morning was by again our very own Eric Fernie, titled Three Reminisces, a Parallel and Something Else. A highlight of this piece was his recollection of meeting Marion Ryan (daughter of John Ryan), who had no record of her father's work for EAGLE, so Eric helped her to acquire copies. Brought up in South Africa, Eric met a fellow countryman while walking in Southport, having recognised his distinctive accent. A fascinating parallel and one of Eric's usual interesting anecdotes. 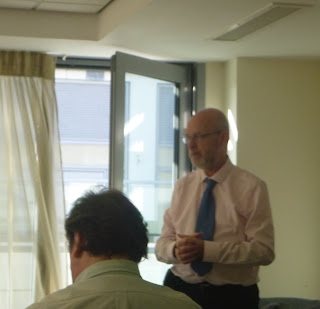 John Freeman completed the session with a talk entitled Down the Tubes about strip magazines today. John is professionally involved with modern day publishing of action adventure comics for both children and adults. His early influences were Pip, Squeak and Wilfred, Rainbow, TV Century 21 and Arthur C. Clarke's books. He became a graphic designer and editor for Marvel U.K. and worked on Doctor Who, Ghostbusters and Star Trek. He also worked on I.P.C.'s Vulcan comic. He launched strip magazine in 2011, which was part of Print Media Productions' plans for new comics for the U.K. He opined that if Frank Hampson had continued working on Dan Dare beyond Terra Nova, he would have kept abreast of scientific developments and discovery. He liked the idea of weekly comics, like EAGLE where the next edition is there the following week, unlike the American comics which lack consistency. 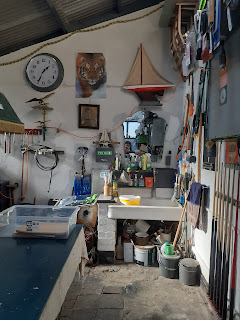 We concluded as usual with the obligatory EAGLE Society Members Meeting, conducted ably by Darren. Bob Corn (our worthy Treasurer) took us through the accounts, showing a healthy bank balance and a membership currently standing at about 140. It is intended that we meet again next year in Greenwich, probably in June, but final plans will be settled by the Team in due course. There was a vote of thanks to David Britton for all his past Committee work and although he is no longer on the Committee due to other commitments, he remains an integral member of the Society and in particular as a contributor to EAGLE Times. Your scribe offered the usual thanks on behalf of the lay membership and congratulated the Team on all their efforts and in particular to Darren Evans, (not to mention Susanne for all her forbearance), in running the whole show.

Although the official Gathering had now concluded, some members had arranged a visit to Churchtown to have another look at the Old Bakehouse, where Dan Dare was first produced, as it has been restored since our last visit. This was followed by a visit to the Hesketh Arms for lunch. Your scribe cannot comment on this visit as both he and his lady wife were off to Blackpool to see family and in your scribe's case (much to Steve Winders' delight as a Preston supporter), to watch Blackpool v Preston North End at Bloomfield Road. By coincidence, so were Mike and Kathy Miles, but not to watch football. By the way, Preston lost!

THE BAKEHOUSE VISIT       by Darren Evans

Seven of us made the trip over to the Bakehouse, four of whom had never visited before. We had prearranged the visit with Mr Henneker, who seemed to enjoy the visit as much as we did. We stayed longer than I expected. Afterwards we all went to the Hesketh Arms for something to eat. The visit was rounded off with a pleasant walk around the Botanical Gardens (to walk off the food) before we went our separate ways. All enjoyed the trip and found it worthwhile. The picture (right) shows the inside of
the Bakehouse today and below shows the exterior. 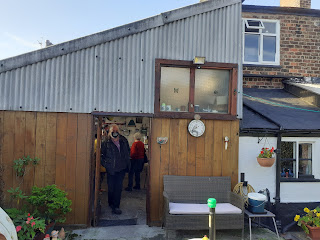 But I see Preston won the return game!