Eagle's cutaway drawings feature ran from the very first issue, 14th April, 1950, until 19th April, 1969 (Vol 20, No 16). The run was not continuous - on about 40 occasions other features replaced it, such as 'Chicko's Christmas Party' (1954 Christmas issue) or, on 14 occasions, the results of painting competitions. Also, some features that are sometimes counted as part of the series are not strictly "cutaway" drawings. It was not headlined as 'An Eagle Cutaway Drawing' until 1963. It was however, the longest running feature in Eagle (since, apart from a four-episode original story which began at the end of Vol 18, 'Dan Dare' had gone into reprint at the beginning of Vol 18, and remained as such until Eagle's demise in 1969 (Vol 20 No 17).

From 1950, and for over a decade, "cutaways" filled the top half of the centre pages as a full colour centre-spread. Later the feature was moved, initially still in colour, to fill the back page and then back inside the magazine, but on a single page in black and white. There seemed no limit to the technologies covered: from the historic, to the contemporary, to the futuristic: trains, boats and planes, trams, hovercraft and rockets, spacecraft, cars, buses, motorways, underground railways, fighting vehicles, motor cycles, power stations - and the photocopier.

By far the most prolific artist was Leslie Ashwell Wood, an example of whose work is seen above*. Of the (depending how you count it) 946 issues of Eagle that included cutaways, 617 were by him, including the very first, and the last (in the penultimate issue of Eagle).

In all, around two dozen artists contributed to the feature, the most notable after Leslie Ashwell Wood being: J. Walkden Fisher, John Batchelor, Geoffrey Wheeler, Laurence Dunn, Hubert Redmill and Roy Cross. It is likely that in many cases authorship of the text that accompanied the drawings is attributable to the artists themselves. This is certainly the case for the leading artists, who would have done their own technical research, and may be true for many of the lesser-known artists too.

The following is an alphabetical list of all the artists who are known to have contributed to Eagle cutaways, together with the numbers of their contributions. In some cases only a single name (presumably the surname) is known. Around a dozen contributions are unattributed to any known author.
Selected cutaway drawing from Eagle are reprinted in:
*The cutaway drawing of the aircraft carrier HMS Eagle by Leslie Ashwell Wood appeared as the centrespread in Eagle's second birthday issue, Vol 3 No1 (10th April, 1952).
Posted by Will Grenham at 18:45 1 comment:

Eagle Annual of the Cutaways 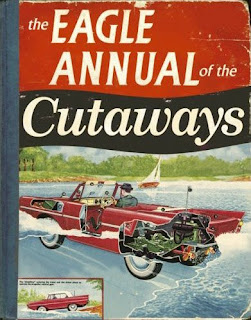 Last year Orion Books produced Eagle Annual: the Best of the 1950s, with the promise of this year bringing out a sequel, Eagle Annual: the Best of the 1960s. Well it now seems the latter has been put back a year, to 2009, and the intervening space will be filled by the Eagle Annual of the Cutaways, which is due for publication on 18th September, 2008. According to the Orion website, the book will be 176 pages (some sources are quoting a longer book, but this seems to be an error), which makes it the same length as last year's Annual - although it will be priced £2 more at £14.99.
To quote Orion's publicity:

"After Dan Dare, the most famous and fondly remembered part of the Eagle comic was the cutaway. Basically, these were beautifully detailed drawings of the inner workings of pretty much anything: from steam trains, jet liners and racing cars, to oil wells, suspension bridges and tube lines beneath Piccadilly Circus. The Eagle had a team of three or four artists, but the king of the cutaway was undoubtedly L. Ashwell Wood, whose forensic attention to detail - be it a cross section of the Cutty Sark or a grand landscape of how electricity is generated - enthralled a generation of school boys."

As seen above, the book will have the "distressed look" of last year's Annual. We have seen it reported elsewhere that the "distressed look" will be confined to the cover. This appears to be based on some illustrations that appeared in a Daily Mail article (9th May, 2008) about the Dan Dare and the Birth of Hi-Tech Britain exhibition at London's Science Museum. However, a 12-page handout on the Eagle Annual of the Cutaways that was made available at the press launch of the Dan Dare and the Birth of Hi-Tech Britain exhibition implies otherwise. Unless the publishers have had a change of heart since printing that handout (which, to be fair is identified as an "uncorrected proof sampler - not for resale or quotation"), the distressed look will pervade the whole book. Which will not please many of Eagle's original readers, judging by some of the reactions we heard to last year's Annual.
Posted by Will Grenham at 17:21 No comments: