The well-known and respected Eagle and Ladybird Books artist, Martin Aitchison, died peacefully on 22 October 2016 at the age of 96. He had a full life, remaining fit and well until 6 months before his death. He will be best, and most fondly, remembered by Eagle readers as the artist who drew the strip 'Luck of the Legion' from 1952 until 1961.

Born in Birmingham in 1919, after an early education at Ellesmere College in Shropshire, he attended Birmingham School of Art and the Slade School of Art. During World War II he enrolled with Vickers Aircraft at Weybridge, Surrey, as a technical illustrator and afterwards he became a free-lance commercial artist.

His first published work was for Hulton Press' Lilliput. This was followed by work for Girl, when he was called upon to fill in for artist Ray Bailey on two pages of 'Kitty Hawk', and to draw 'Flick - and the Vanishing New Girl' for Girl Annual No 1.

He became one of Eagle's major non-'Dan Dare' artists. For nine years he produced weekly strip artwork for 'Luck of the Legion', which was scripted by Geoffrey Bond. 'Luck of the Legion' was one of the few strips in Eagle that had the same artist throughout its run. He also drew for Swift and Swift Annual. When 'Luck' was dropped from Eagle, Martin drew a further three strips for Eagle, plus one for Eagle Annual, before leaving in 1963 to work for Ladybird Books. He became one of their principal artists and produced artwork for around 70 titles, until 1990.

For members of the Eagle Society, their first acquaintance with the man, rather than his work, was when in 1996, Martin attended an Eagle Society Annual Dinner at Sparsholt, as Guest of Honour.

From 1998, although "retired", he teamed again with writer Geoffrey Bond and drew 'Justin Tyme - Ye Hapless Highwayman', a humorous strip, which ran for over 5 years in Eagle Times.

There is a list of Martin's Eagle work and references on our earlier blogpost: Eagle Artists - Martin Aitchison (from which some of this post has drawn). 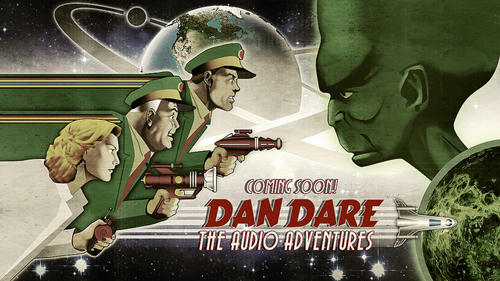 A new series of Dan Dare audio adventures, based on the characters and stories from Frank Hampson’s original comic strip in Eagle has been produced by B7 Media and will be published by Big Finish, available from December, 2016.

The new series will the fifth incarnation of Dan Dare in audio form.

Ed Stoppard has had many film, television and theatre roles, in movies such as The Pianist, Brideshead Revisited, and Youth. Recent television roles have included Brian Epstein in Cilla, and Dr Will Campbell in Home Fires.

Dan Dare’s loyal companion, Digby, is played by Geoff McGivern, probably best known to science fiction fans as the original Ford Prefect in The Hitch Hiker’s Guide to the Galaxy on radio and in recent live UK tours. Some of his recent TV roles have been in Toast of London, Esio Trot and Episodes.

Professor Peabody is played by Heida Reed, best known in the role of Elizabeth in the currently running BBC drama series Poldark.

Sondar is played by Bijan Daneshmand, whose acting credits include 20 Fingers, A Snake’s Tail, Body of Lies, Munich, Page Eight and the BBC dramatisation of John le Carré’s The Night Manager.

The Mekon is played by Raad Rawi, known for his roles in Spy, The Devil's Double and Traitor, as well as appearances in some of the most popular British television drama series, such as Coronation Street, The Bill, Silent Witness, Holby City, etc. and the mini-series The Honourable Woman.

Sir Hubert will be played by Michael Cochcrane, who has had numerous acting roles on television and radio, including (on TV) Wings, Criminal Justice, Law and Order and Sharpe.

His film career has included Escape to Victory, The Return of the Soldier, Number One Gun, The Saint, Incognito, A Different Loyalty and The Iron Lady.

The first volume of adventures will be published at the end of December 2016, and will be available as a 4-CD set or a download from the Big Finish website. The volume will contain Voyage to Venus, The Red Moon Mystery and Marooned on Mercury and, on the fourth disc, a documentary on bringing Dan Dare back to audio life in 2016.

A second 4-CD volume containing Reign of the Robots, Operation Saturn and Prisoners of Space plus another documentary “bonus” disc, will be published in February 2017.

The Dan Dare Audio Adventures can be pre-ordered from the Big Finish website, where you can find further details: www.bigfinish.com  The pre-order price for each volume is £20 for download or £25 for a CD box-set.

With thanks to John Freeman and B7 Media, who provided most of the information and the pictures
Posted by Will Grenham at 21:40 No comments: 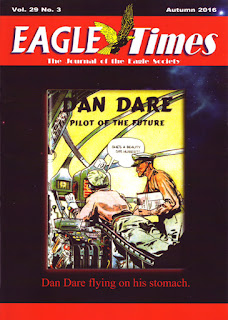 This issue's cover picture is from from Eagle No 5 (12 May 1950). It may have been based on a photograph of a prone USAF pilot that appeared in National Geographic magazine the previous year
Posted by Will Grenham at 00:00 No comments: