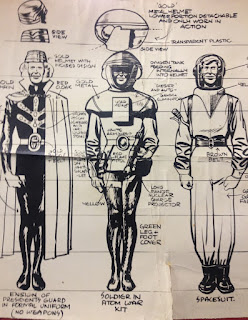 A free exhibition to celebrate the centenary of Frank Hampson's birth is being held at the Bourne Hall Museum in Spring Street, Ewell in Surrey. Running from December 4th 2018 until March 12th 2019,  the opening times are:
Monday 9am - 10:30pm

Bourne Hall
Tel: 020 8393 9571
Email: BourneHallMailbox@epsom-ewell.gov.uk
Website: www.bournehall.org
PRESS RELEASE
The 100th anniversary of the birth of Frank Hampson is to be marked by an exhibition at Bourne Hall Museum. Frank Hampson came to Epsom in the early 1950s and was soon established in Bayford Lodge, which served as his home and his studio.  There, for a decade, he created the cartoon strips that held the nation's schoolboys (and others!) enthralled, as they waited eagerly each week for the latest edition of Eagle to learn whether Dan Dare, the intrepid space explorer, had survived his most recent mission. An exhibition about the life of the gifted illustrator will be put on display at Bourne Hall Museum from 4th December until 12 March 2019.The display will include original artwork which has been loaned by Peter Hampson, Frank’s son, including a front page of the Eagle – drawings of Treens, Therons and other alien characters from the comic – and covers drawn by Frank for the popular Ladybird books. Also on display will be the annuals which were such eagerly awaited Christmas presents, and comics which will bring back memories of trips to the newsagents to get a new copy, running back home to read the latest adventure.
Museum curator, Jeremy Harte, says "There will be many people locally who remember, for example, the staged fights with ray guns outside Bayford Lodge, as Frank Hampson gathered material for the next instalment to go up on his drawing board." 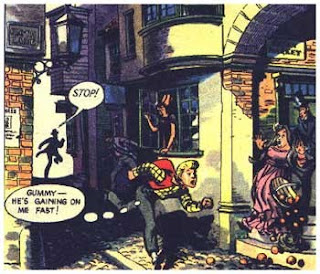 Jack O’Lantern was originally another name for the strange phenomenon of light hovering over peat bogs, also known as a Will o’the Wisp. Carved out pumpkins with faces are often called Jack O’ Lanterns. This old name provided an excellent title for George Beardmore’s popular Eagle strip about a boy’s adventures in the early nineteenth century, but Jack Yorke is not the only Jack O’ Lantern in comics. Both Marvel and D.C. Comics in America have used the name several times. Beginning in 1977, D.C. used the name for three superheroes who each took the name following the death of their predecessor. These ‘Jacks’ did not operate alone, but as members of super hero teams. Conversely, from 1981 Marvel featured four villains who took this name, with each one again replacing an earlier version in turn and providing enemies for Spiderman and Captain America. 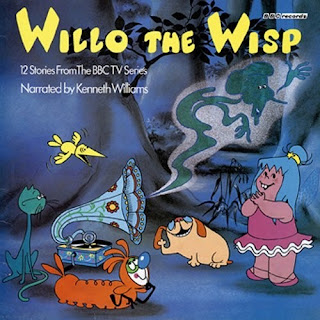 This brings us nicely to Willo The Wisp, the 1981 B.B.C. TV cartoon series made by Nicholas Spargo, who may be recalled by Eagle readers as the creator of The Legend of the Lincoln Imp, which featured on the centre pages below the cutaway drawing, back in 1951. Soon after his work for Eagle, Nicholas worked for Halas and Bachelor on Britain’s first ever cartoon feature film Animal Farm. He also ran his own animation company which principally produced cartoon advertisements and educational films, sponsored by companies, but his main claim to fame is Willo The Wisp, a series of five minute films for children, featuring the voice of Kenneth Williams. The character of Willo actually originated in an educational film he made for British Gas in 1975. 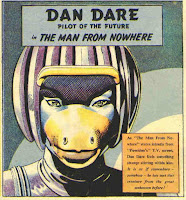 The Man From Nowhere was an intriguing and appropriate title for the story of Dan Dare’s first encounter with people from another solar system, but there are several other ‘men from nowhere’ in books and films.

In 1959 the famous western writer T.V. Olsen used it as the title of his latest western novel and just seven years later it was the title of an unconnected ‘spaghetti’ western. Most recently, in 2002 it was the name of a Korean contemporary action film, which also enjoyed a successful release in Canada and the U.S.A.

But before we congratulate Frank Hampson on using the title first, we need to look right back to 1915 to a silent film starring William S. Hart and this too was a western and unconnected to the others! 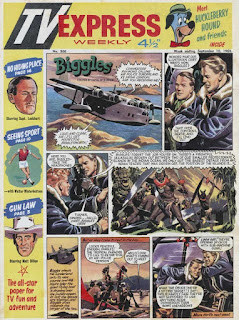 Jim Duckett recalls the ‘Biggles’ serials and short stories which appeared in Eagle and its annuals.

In a text story in the second EAGLE Annual, published in Autumn of 1952, one of Britain’s most famous fictional heroes began his association with EAGLE. Created by Captain W.E. Johns in 1932, James Bigglesworth, known to all as ‘Biggles’ was originally a young pilot of the Royal Flying Corps fighting in the First World War. Later he became a charter pilot and when the Second World War began, he again served his country in the Royal Air Force. After the War he became a founder member of the fictional Special Air Police, allowing him and his team of pilot colleagues to have further adventures. When ‘Biggles’ appeared in EAGLE Annual, he had already featured in forty six books, as Captain Johns (who had served in the R.F.C. himself, though as a Flying Officer, not a Captain) usually wrote two or three per year.

In this short story, illustrated by Harold Hailstone, called Biggles Buys a Watch, our hero chances upon and exposes a watch smuggling racket. Two more stories would appear in the next two annuals, but in a text serial beginning just a few months later, in Volume 3 No. 50, in the issue dated 20th March 1953, Biggles made his first appearance in EAGLE weekly. This was in a long story called Biggles in the Blue, which like the Annual stories and another Biggles serial that immediately followed it, marked their first publication. Biggles in the Blue was published as a book just as the last of its nineteen episodes appeared in EAGLE and the second adventure, Biggles in the Gobi ran for seventeen episodes, with the book’s publication coinciding with episode twelve.

Each episode of the two serials was printed over two pages, but thanks to advertising and ‘Puzzle Corners’ really only filled a page and this included a ‘drop in’ illustration by Edwin Phillips, which increased to two when Biggles in the Gobi began. Not surprisingly the stories were abridged, although thanks to EAGLE’s large pages and small text type, not quite as much as one might expect. A clear example of abridgement occurs in the third episode of Biggles in the Blue where there is an obvious summary of a longer scene which does not involve action. Biggles in the Blue is set in Jamaica and tells how Biggles and his friends have to track down secret German documents containing details of secret weapons, taken there by an ex-Nazi after the War, before a group of villains led by Biggles’ arch enemy Von Stalhein can get hold of them. Biggles in the Gobi began in the issue dated 31st July 1953 (Vol. 4 No. 17) and was about an operation to rescue a group of Christian missionaries from Communist China. It includes an incident in which Biggles’ plane crashes into an eagle! The first instalment of this serial carried a note for EAGLE readers from the author, in which he explained that all the places named in the story really exist and went on to describe the ‘Cave of a Thousand Buddhas’ and to tell readers something about the Gobi Desert itself. This adventure concluded in the issue dated 20th November 1953 (Vol. 4 No. 33). As one might expect from such a popular writer and character, both stories were well paced and exciting, despite abridgements. However, apart from the annuals, this would be Biggles’ final appearance in Eagle. Between the first and second serials, EAGLE’s editor Marcus Morris informed readers that as Biggles in the Blue had proved so popular, EAGLE would be serialising the next Biggles book the following week. I don’t know whether the original agreement had been to run two stories right from the start, but I suspect that given the already established popularity of the character, EAGLE’s licence to publish stories ahead of the books would prove too expensive to continue indefinitely. Many Biggles books were first published in serial form in periodicals and most of the short stories appeared first in magazines or annuals. Shortly before EAGLE published the two serials, the Boy’s Own Paper published several titles, ending with Biggles Follows On in 1952 and subsequently Junior Mirror, Express Weekly, TV Express and Boy’s Own Paper again, printed later stories as text serials prior to their publication as books. As a best-selling weekly with many successful characters of its own, EAGLE would not want to enter a bidding war with its rivals.

Nevertheless there were two more short stories for readers of EAGLE Annuals Number Three and Four to enjoy. The first was The Flying Crusaders in which a thief who has hidden a valuable stolen painting on a plane, tries to buy the plane to retrieve it. The final story was The Adventure of the Luminous Clay, about a race against time to find a valuable mineral on a volcanic island that is in imminent danger of destruction. All the annual stories were illustrated by Harold Hailstone, which sounds like an alias, but isn’t! He was a popular cartoonist and illustrator who contributed to many publications, although the Biggles stories in the annuals were his only work for EAGLE. The three annual stories were also later published in Biggles books in collections of short stories. Biggles Buys a Watch appeared in Biggles and the Pirate Treasure, published in July 1954 and The Flying Crusaders and The Adventure of the Luminous Clay appeared in Biggles’ Chinese Puzzle, published in May 1955.

Although Eagle’s links with Biggles ended in 1954, there are several other interesting connections between the two that are worthy of mention. In 1955, Juvenile Publications brought out a comic strip version of Biggles in the Cruise of the Condor. This was illustrated by Pat Williams, who drew several strips and features in Eagle. But the previous year he also drew a strip book of exactly the same size for Juvenile Publications called Jeff Arnold in the Bozeman Trail, about Eagle’s popular cowboy. Eagle and Boys’ World artist Ron Embleton drew a Biggles strip in 1960, but in Eagle’s rival weekly, TV Express. In 1968, plans to make a Biggles feature film got as far as casting James Fox in the title role. Sadly the film was never made, just as a television series in 1981 in which Fox was cast as Eagle’s Dan Dare was never made either! A Biggles film finally saw the light of day in 1986 and this was advertised in the new version of Eagle in five weekly half page advertisements which took the form of comic strips. Unfortunately the film was a disappointment after original plans to make an ‘Indiana Jones’ style adventure remaining fairly true to Johns’ stories were ditched in favour of a story involving time travel to cash in on the recent success of Back to the Future.