THIS ARTICLE BY STEVE WINDERS APPEARED IN THE CHRISTMAS ISSUE OF EAGLE TIMES IN 2016. 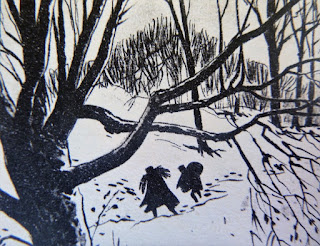 Francis Dickson, alias ‘R.B. Saxe’ died in February 1953, having written three back page ‘real life’ serials for EAGLE. He had also written strips about the lives of Elizabeth Fry for GIRL ANNUAL and Wenceslas of Bohemia for EAGLE ANNUAL and these were his final published works, appearing many months after his death when the annuals were published ready for Christmas 1953. In his strips for EAGLE, Saxe never let the truth get in the way of a good story and he sometimes placed events at the wrong time and outside their proper context to make his story flow better. Wenceslas the Good is no exception. Running for just six pages in black and white, it tells the story of a Duke of Bohemia from the tenth century who was a champion of Christianity. Although greatly venerated in England in the years following his death, Wenceslas would have been unknown in contemporary Britain but for a popular Christmas carol written in 1853 by an Anglican clergyman John Mason Neale  who was a prolific writer of hymns. The hymn was set to the melody of a thirteenth century Spring carol called Tempest Adest Floridum, which he had found in an old Finnish song collection. The words themselves are believed to be based on a Czech poem by Vaclav Alois Svoboda.

In both the strip and the carol, Wenceslas is described as a King although he was actually a Duke. However, after his death, the Holy Roman Emperor Otto the First posthumously conferred the title of King on him. Born in 907, Wenceslas was heavily influenced by his pious grandmother Ludmila, while his younger brother Boleslas was more influenced by their mother Drahomira, a nominal convert to Christianity with strong pagan sympathies. Saxe correctly recounts all this in the strip omitting only Wenceslas’ year of birth. The strip wrongly reports the death of his father as 926 while most authorities place his death in 921. If he had died as late as 926 then Bohemia would not have needed a regent as both the strip and reality show. Wenceslas is still depicted as a young boy. The strip says that his mother was made regent, but Saxe omits to say that she was obliged to share authority with Ludmila and that Drahomira had her killed! A frame shows Wenceslas telling his mother that now he is ‘King’ he will build more churches and convert his people to Christianity. She reminds him of her authority and says that no churches will be built as it would offend the pagan barons.

According to the strip, Wenceslas’ mother persuades the barons to carry out raids into what Saxe describes as ‘the German Empire’ led by Boleslas, prompting his older brother to warn her of the folly of this as Henry of Germany is strong. His mother dismisses his fears saying that neighbouring states will help if the Empire attacks. Henry invades Bohemia ‘the very next day’ and is soon besieging Prague. To overcome this crisis, Wenceslas abolishes the regency and takes control. He makes peace with Henry which brings Bohemia into his Empire and having to pay an annual tribute, but the treaty is described as fair. As usual in Saxe’s stories, the truth is far more complicated.

What actually happened was that Wenceslas’ father Vratislaus had secured an alliance with the Bavarian Duke Arnulf, an opponent of Henry, to avoid being absorbed by his Empire, but in 921, the year of Vratislaus’ death, Arnulf and his forces were besieged by Henry in Regensburg and Arnulf was forced to sue for peace, making the alliance worthless. Wenceslas assumed leadership of his Duchy in 924 or 925 when he came of age and exiled his mother. As in the strip he began to build churches and schools, including a rotunda church dedicated to Saint Vitus in Prague Castle, which exists to this day as Saint Vitus’ Cathedral. It was not until 929 that the joint forces of Arnulf and Henry attacked Prague in a sudden attack and forced Wenceslas to pay a regular tribute, so the events as described in the strip are misleading. However some historians believe that when Drahomira was regent she had opposed accepting the Christian Henry as overlord of Bohemia, whereas Ludmila who strongly influenced Wenceslas was believed to support Henry’s authority. Although Wenceslas did not subsequently ally himself with Henry until he was forced to, Arnulf began raiding Bohemia in 922, which put him in a difficult position and his banishment of his mother may have been partly due to her enmity towards the powerful Henry. Saxe was correct in showing that Henry and Wenceslas had great respect for each other. They recognised their shared aims in spreading Christianity.

The strip goes on to show rebellious barons objecting to Wenceslas sending out missionaries to convert their serfs into ‘rebellious dogs of Christians’ and the missionaries and their converts are forced to worship in hiding. This was certainly a period of tension in Bohemia as Christianity steadily replaced paganism and given Drahomira’s objections to Wenceslas’ promotion of the Christian faith, there was clearly a resistance to it in high places. Wenceslas is then shown giving gifts to the poor and Saxe follows this with the story told by the famous carol. On the Feast of Stephen (December 26th) Wenceslas sees a poor old man out in the snow gathering twigs for his fire and asks his page if he knows where the man lives. The page tells him that he lives a good ‘league’ away (the distance specified in the carol which equates to about three miles) and Wenceslas instructs him to gather wood and food for the old man. They then trudge through the snow to the man’s cottage and surprise him with the wood and a feast. The story is based on old stories of Wenceslas which tell how he went out at night, assisted only by his chamberlain to take gifts of food and money to the poor. Given that the carol is the only reason that most readers would have heard of Wenceslas, it is inevitable that the story is told in the strip.

Saxe’s account ends with the barons persuading Boleslas that his brother must be killed and he is ambushed by Boleslas and two others on his way to Church. The date is given as September 28th 926. The date is correct but the year has been misprinted. Earlier the strip had incorrectly given his father’s death as 926! The correct year of Wenceslas’ murder is given on the next page as 936, although many authorities say 935. It was a long time ago! In the strip Wenceslas is stabbed to death by one of his brother’s companions. Tradition holds that he was indeed killed by his brother, aided by three other men. Although not mentioned in the strip, his body was dismembered and buried at the scene which immediately became a place of pilgrimage and many miracles were reported there. Subsequently his body was moved to St. Vitus’ Church in Prague by a repentant Boleslas. The strip concludes with Boleslas feeling remorse for his brother’s murder and dedicating his newborn son Stratchk to the Church. This is true. Stratchk grew up to become Bishop of Prague, although sadly he died suddenly on the day of his consecration.

After his martyrdom a cult grew up around Wenceslas, particularly in Bohemia and England. The Anglo-Saxon English identified with his struggles against paganism, having faced similar experiences with their pagan Viking neighbours, who were now gradually converting to Christianity. They were probably also influenced by the esteem in which he was held by Henry and later his son Otto, who were the leading Saxon rulers in Europe, with Otto becoming Holy Roman Emperor in 962. Wenceslas was hailed as a saint and his death significantly promoted the cause of Christianity in Bohemia, not least because of his brother’s remorse.

The strip provides readers with a flowing and well-constructed account of Wenceslas’ life. In simplifying the complex political situation after his father’s death it contains inaccuracies and there is some confusion about dates, but it gives a reasonably accurate portrayal of a saint who everyone has heard of but few really know anything about. As in all Saxe’s EAGLE strips Wenceslas the Good was drawn by Norman Williams, although in black and white whereas his back page weekly stories were in colour. Unable to make use of his skills in using contrasting colours to show characters’ emotions, he nevertheless uses fine and heavy lines most effectively. He also uses a lot of dark shading which gives the images depth and sharpness.

Wenceslas the Good was a most appropriate strip for EAGLE ANNUAL. Telling the story of a hero most closely associated with Christmas, it appears in a book that most readers would receive at Christmas, which is also why it is featured in this blog at Christmas. Almost uniquely among Christmas carols, Good King Wenceslaus makes no reference to the Nativity of Jesus, yet its theme of giving binds it firmly to the season. 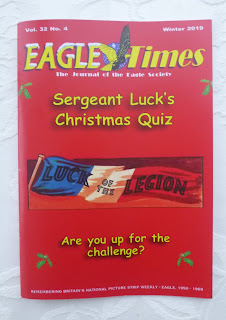 The Winter EAGLE Times is out now and contains a range of articles about our favourite weekly.
Luck of the Legion and the Phantom Story by David Britton. A planned story about the Foreign Legionnaire that was never published.
Pop Goes The EAGLE by Will Grenham. A look at Pop music in EAGLE.
Patrick- Fighter for Truth by Steve Winders. An examination of EAGLE's back page strip from 1951.
EAGLE's Annuals by Joe Hoole. The first of a three part series about all the EAGLE Annuals.
Sergeant Luck's Christmas Quiz.
Charles Chilton and the Indian Wars Part Seven by David Britton. A look at the Riders of the Range story The Cochise Affair.
The Case of the Counterfeit Constable by Steve Winders. The final part of Steve's Archie Berkeley- Willoughby story about art forgery.
In and Out of the EAGLE (40) by Jim Duckett. This edition focuses on Harris Tweed .
Tailpieces by David Britton.
Postbag: Readers' Letters.
REGULAR SUBSCRIBERS ALSO RECEIVED A FREE EAGLE TIMES CALENDAR FOR 2020.
Posted by Jim Duckett at 14:54 No comments: