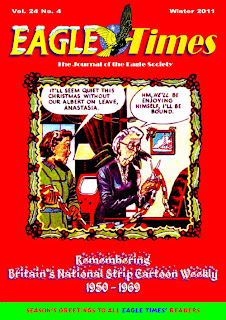 Posted by Will Grenham at 17:03 No comments:

It's been a while since we featured Spaceship Away on this blog, but the recent arrival of Part 25 on my doormat prompted me so to do. Spaceship Away is a three times a year, full colour, 40-page A4 glossy magazine that publishes new "old-style" 'Dan Dare' strip stories  and articles along with other science fiction strips. With three issues a year, Part 25 marks the beginning of Spaceship Away's 9th year of publication, albeit the Autumn issue and therefore the last of 2011.
The issue sports a Christmas-themed cover by veteran 'Dan Dare' artist Don Harley, with Dan, Digby (laden with Christmas presents) and Stripey arriving back at a snowy Spacefleet HQ as a group of Spacefleet carollers sing in the background. The cover picture heralds, inside, a two-page 'Dan Dare' Christmas story, 'Missiles and Mistletoe', written by Sydney Jordan and drawn by Don Harley, and which opens with an almost identical scene to the cover. Further on the 'Dan Dare' strip content continues with the sixth episode of 'Parsecular Tales' (written and drawn by Tim Booth) and 'Dan and Digby's Happy Landing'; a two-pager by Don Harley.
Other content includes the articles 'Desmond Walduck: "A Worthy Earthman"' by Alan Vince and 'Spacefleet Headquarters' by Charles Evans-Gunther. There is a new piece of artwork by Don Harley, featuring Dan Dare and the four Spacefleet cadets from 'Prisoners of Space', and the centrespread, by Ian Kennedy, features the Mekon and three varieties of Dan Dare that Kennedy drew for the "new" Eagle in the 1980s. Oh, and there's a board game: 'Dan Dare's Race in Space' - provide your own dice and counters. The back cover features a new painting by Bruce Cornwell of the Anastasia space-plane flying over Spacefleet HQ.
Plenty, then, for the Dan Dare fan, and the non-'Dan Dare' strip content includes the second episode of 'Finality Factor', which is a 'Garth' story by Jim Edgar and Martin Asbury, originally drawn by Fank Bellamy, and (now) coloured by Tim Booth; and episode 4 of 'Shadow Over Britain', the 'Journey into Space' story written by Charles Chilton and drawn by Ferdinando Tacconi and Bruce Cornwell, that first appeared in Express Weekly in 1957.
Spaceship Away is available from some specialist outlets (comic shops) but for further details, including how to subscribe, please go to the Spaceship Away website.
Posted by Will Grenham at 15:49 No comments: