IN AND OUT OF THE EAGLE 2 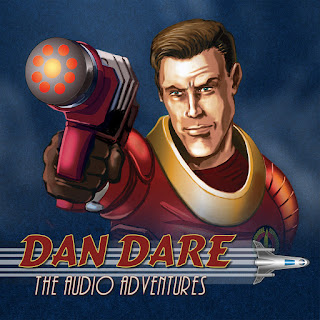 The first three adventures from B7 Media's Dan Dare audio productions are to be broadcast on B.B.C. Radio Four Extra next month. The series stars Ed Stoppard as Dan, Geoff McGivern as Digby and Heida Reed as Professor Peabody. This will be the third version of Dan's adventures to feature on radio. Between 1951 and 1955, Radio Luxembourg broadcast Dan Dare serials in fifteen minute episodes, five nights every week. Noel Johnson, who had played Dick Barton in the B.B.C.'s popular adventure serials, played Dan and John Sharp played Digby. In 1990, to celebrate the fortieth anniversary of Dan and EAGLE, the B.B.C. produced a four part serial which dramatised Dan's first adventure from EAGLE. This serial starred Mick Brown as Dan and Donald Gee as Digby.
Posted by Unknown at 08:47 No comments:


Eagle Times features a regular column called In and Out of the EAGLE and we are going to feature some of these to give a flavour of the magazine's content. 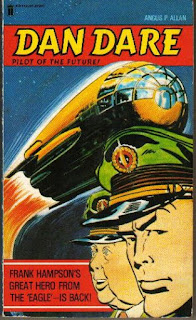 Basil Dawson’s original EAGLE novel Dan Dare on Mars is well remembered by fans, but in 1977 the New English Library published a paperback adaptation of part of Frank Hampson’s first Venus story. The book was written by Angus P. Allan, a prolific comic strip writer, who contributed to TV Century 21 and became the principal writer for Look In, another comic based on television characters. He never contributed to EAGLE, but his father was Carney Allan, who wrote the wartime adventure strip Mann of Battle, which ran in EAGLE from 1962 - 64. The novel ends with Dan’s rescue of his friends from Mekonta and the Dapon’s sacrifice in destroying the Mekon’s Telezero ships, leaving out the Treens’ visit to Earth and the eventual defeat of the Mekon. Several frames from the original strip were used to illustrate the book, but reprinted in black and white.

1977 was a good year for Dan and EAGLE, for there was also Marcus Morris’ The Best of EAGLE, which reprinted extracts from many strips and features from the first decade of the weekly. Dan himself was revived for 2000A.D. comic, although in a much altered form, which did not please many of his old fans. The reason for this renewed interest was Frank Hampson’s Yellow Kid Award presented to him at an international convention of strip cartoon and animated film artists in Lucca, Italy, just two years earlier, when he was voted the best writer and artist of strip cartoons since the war by a jury of his peers. This awakened interest in him and in Dan Dare by the British press.

Email ThisBlogThis!Share to TwitterShare to FacebookShare to Pinterest
Labels: Angus P. Allan, Basil Dawson, Dan Dare novel, Dan Dare on Mars, In and Out of the Eagle 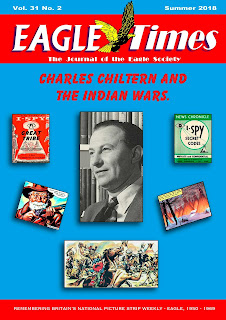