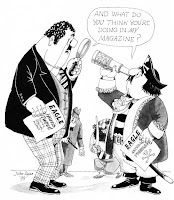 John Christopher Gerald Ryan was born in Edinburgh on 21 March, 1921. His father being in the diplomatic service, he spent some of his early life abroad, but he received his education at Ampleforth College, Yorkshire. It was there he first gained an interest in cartooning (writing and drawing for the school magazine was offered as an alternative to a thrashing for a minor offence!)
During the second World War he served with the Lincolnshire Regiment, mainly in Burma, and when not otherwise occupied he sketched and drew caricatures, which were published in army magazines. After the war, he attended art classes in London at the Regent Street Polytechnic, following which, he joined Harrow School as Assistant Art Master. He had met his future wife Priscilla while at the Regent Street Polytechnic, and in 1950 they married. As a wedding present, a friend introduced them to Marcus Morris, then priest and editor of Anvil.
John produced some illustrations for Anvil, and was challenged by Morris to create a humorous strip for a new children's magazine, which would be Eagle. The result was 'Captain Pugwash', "the story of a bad buccaneer & of the many sticky ends which nearly befell him". The black and white strip appeared on the lower half of page 5 of the first issue of Eagle. Although later destined to become successful as an animated television series and a series of books, Captain Pugwash's life in Eagle was short. Deemed too young for the Eagle's target audience, Pugwash sailed away after his 19-episode first adventure. But John Ryan was a talent too good to waste, and Marcus Morris had already asked him to create a new strip, which he did - based on a skit of Priscilla's "ideal man". 'Harris Tweed' began in issue 15 of Eagle and ended, after twelve years of weekly episodes, in 1962. Along the way, John also created, wrote and drew successful strips for Eagle's companion papers, Girl ('Lettice Leefe, the Greenest Girl in the School') and Swift ('Sir Boldasbrass'), and for all three papers' associated Annuals. After Girl folded, John continued to draw 'Lettice Leefe' for Princess - accomplishing a 16-year run of weekly episodes.
Foregoing Harrow School's offer of a job as Art Master, John remained Assistant Art Master until 1955, when he became a full-time freelance writer and artist. Although 'Captain Pugwash' had not been a success in Eagle, John Ryan worked on his beloved character, and drew and wrote the first of what was to become a series of Captain Pugwash books. In 1956, after many rejections, Captain Pugwash found a publisher in The Bodley Head. He also sold the idea for an animated series of 'Captain Pugwash' to BBC Television. His animation technique was innovative, using painted backdrops and cut-out, two-dimensional figures with movable limbs and mouths, made from painted card and held together with paperclips. Levers allowed him and his assistants to manoeuvre the figures and their expressions for real-time animation - and live transmission! A pilot production was so successful that it resulted in 1957 in a series of 58 black and white episodes, and for eight years he drew a weekly 'Captain Pugwash' strip for Radio Times. A 'Captain Pugwash' strip also appeared (briefly) in Swift (1958) and Playland (1974), also written and drawn by John. 'Sir Prancelot' (from another TV series) appeared in Playland in 1972. From 1963, for 43 years he drew weekly cartoons for The Catholic Herald, but it is for his children's publications and programmes that he is most fondly remembered.
In 1969 he created a 13-part series called 'Mary, Mungo and Midge' for BBC Television. He followed this with 'The Adventures of Sir Prancelot' (32 episodes), and in 1974 he returned to 'Captain Pugwash' again, producing a new series of 30 colour episodes. In the 1980s 'The Ark Stories' (on ITV) featured John Ryan in his studio to introduce each of his stories of animals from Noah's Ark with a sketch.
John and Priscilla moved from Kensington to Rye, East Sussex, in 1988, and John continued to work until shortly before his death in Rye hospital on 22 July 2009. It was at Rye that John was an Eagle Society guest of honour for our annual gathering in 1993. John allowed us a visit to is home and studio, provided us with a tour of Rye and joined the "Eagle Society Players" for a play reading of 'Harris Tweed'.
The illustration by John Ryan is from the Spring 1993 edition of Eagle Times
Obituaries:
Channel 4 newspiece on YouTube:
For other Captain Pugwash clips on YouTube Click Here
For an interactive storybook of Captain Pugwash and the Sea Monster click on the graphic below:

Posted by Will Grenham at 12:12 No comments: