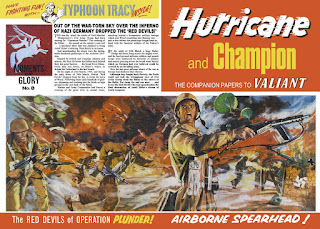 A new edition of Steve Holland’s book about the comics Hurricane and Champion now covers the twelve annuals in addition to the weeklies and its detailed index has been updated with some new information about the creators of the strips and a new cover by Jordi Penalva. As with his other books, Steve has written a thorough account of the creation of the two weeklies, their content and their styles. He provides many examples of pages and other illustrations from the comics to support his text and as always, his work is well researched, with contributions from Gil Page, the former editor of Champion (and briefly also editor of EAGLE) and assistance from several comic experts including David Roach and our own Jeremy Briggs.

The book is full of interesting details about the two comics and provides an insight into the way Fleetway worked in the 1960s. Hurricane was the longest running of the two, lasting 63 issues (February 1963 – May 1964) before merging into Tiger, although its annuals ran until 1974. It introduced two long running strips in Typhoon Tracy, a peacetime version of Valiant’s Captain Hurricane and Skid Solo, a racing driver, whose adventures would run for a further sixteen years in Tiger. I recall Typhoon Tracy being Hurricane’s front page hero, but learned from the book that for a short while he was replaced on the cover by a football strip called Hurry of the Hammers. It wasn’t West Ham, but Hammersfield Town and it was actually a reprint of the early Roy of the Rovers from Tiger, a decade earlier with the text altered. ‘Hurry’ was actually Harry Cane, which coincidentally is almost the name of the current real England captain and Harry Kane also has the nickname Hurri-Kane.

With a mix of science fiction, sport, western, historical and humour strips, Hurricane ran a range of stories, like its companion paper, although Steve suggests that initially it was probably aimed at the older end of the market. He gives a detailed account of the changes introduced in attempts to boost sales of Hurricane and indeed the introduction of repeated material to save on costs, but the arrival of serious competition in the form of TV Century 21 caused Fleetway to give their boys’ weeklies a makeover. They increased the content to 40 pages and merged Hurricane with Tiger, which was suffering from falling circulation at the time. The merger worked, giving the combined paper a healthy circulation and Tiger went on to outlive all the other Fleetway boys’ adventure weeklies that were running at the time, eventually being merged into the new EAGLE in 1985.

Champion took the name of a previous story paper, which had run from 1922 until 1955. However it was quite different from its predecessor. Half the new paper consisted of reprints of strips from the Franco-Belgian Tintin and Spirou magazines and the book examines these. From Tintin there was Jet Jordan, the adventures of a pilot in the Royal Canadian Air Force. The strip, which had strong science fiction elements was called Dan Cooper in the original French language version. This was Champion’s colour cover strip and each episode opened with a large new frame to attract attention. The reprinted frames were edited to fit the pages. Also from Tintin were a strip about a wildlife photographer fighting ivory poachers in Africa, a science fiction adventure and The Knights of Konigsfeld, a motor racing strip, not a medieval adventure, which featured the long running character Michel Vaillant. Hugely successful in France and Belgium, his adventures in albums are still available today. Tintin magazine also supplied the humour strip Modeste et Pompom, which became Jinks.  From Spirou came two humorous strips. There was the now famous Lucky Luke strip, who was known as Bingo in Champion and a strip called Starter, which was relocated to Liverpool and called Whacker. There were also four new British adventure strips and one repeat. The most enduring adventure strip was the superhero story The Phantom Viking, which ran for two years in Lion after the comics merged.  There were two new humour strips, both of which had science fiction themes. A science fiction text story called Bartok and his Brothers completed the predominantly science fiction character of the paper, although according to Gil Page, this was not deliberate. Most of the strips had been passed on to him from the unused strip department as a fait accompli!

Examples of artwork from Champion by Albert Weinberg (Jet Jordan / Dan Cooper), Jean Gratan (Knights of Konigsberg), Edouard Aidans and Ferdinando Taccconi, as well as Eric Bradbury, Carlos Cruz and Mike White, who would later contribute to the new EAGLE are included in the book.

Champion ran for a mere fifteen issues (February to June 1966) before being merged into Lion, never having the benefit of a makeover or relaunch. But despite its extremely short life and partly because of it, its story is an interesting one and much credit goes to Steve Holland, who has researched and told it so well. The book now runs to 60 black and white pages, with a full colour softback cover. It is published by Bear Alley Books and retails at just £8.99 with £4 postage and packing and I can confidently recommend it. 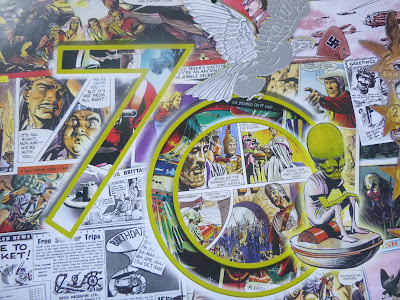 Today marks the 70th Anniversary of EAGLE . Happy birthday to our favourite paper.
Posted by Jim Duckett at 09:29 No comments: 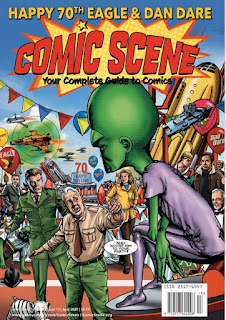 ComicScene Magazine has produced a special edition to celebrate Dan and Eagle's seventieth anniversary. Full details can be found here in their press release:

On 14th April 1950, following the end of World War Two and with the UK still in the grip of rationing, a splash of colour came into everyone's lives with the launch of Eagle comic and the character Dan Dare, Pilot of the Future. 900,000 people bought the first issue. Now in the grip of another national crisis, we can enjoy the exploits of Dan Dare once again. Exactly 70 years later on 14th April 2020 ComicScene Magazine will launch worldwide in print and digital a special anniversary issue with articles on Eagle and three picture strips in the original style of 50's Dan Dare in a special 'Spaceship Away' supplement.
Editor of ComicScene Tony Foster said "We wanted to celebrate 70 years of UK comic history with a milestone edition of ComicScene. It could be argued without Eagle and Dan Dare and the work of editor Marcus Morris and creator Frank Hampson, we wouldn't have seen Doctor Who, Star Wars and comics like 2000AD, Judge Dredd and even US comic classics like Watchmen and the original format of Dark Knight. Eagle influenced a generation of comic books and stories like never before. This Collectors Item of ComicScene tries to capture that, as well as exploring what comic creators are up to today."
The magazine will be available as a 110 digital issue and 80 page print issue by post on 14th April, distributed exactly 70 years after the launch of the original Eagle.  It can be ordered at
www.getmycomics.com/comicscene
Tony explained, "The magazine is sold in newsagents across the UK, Ireland, USA, Canada and Australia.  Unfortunately the Virus from Venus means this issue will come to newsstands a little later this year but Dan Dare won't be beaten and the wonders of digital and mail order will win the day!"
The magazine features articles on the 1950's Dan Dare, Dan Dare in 2000AD, Dare by Grant Morrison and Rian Hughes, the 1980's relaunched Eagle, the Dan Dare audio adventures, a free pull out Eagle and Dan Dare supplement and new Euro and Indie comics. There are also picture strips including Judge Dredd co- creator John Wagner on Rok of the Reds, Gentleman Jack meets Dick Turpin style adventures in Flintlock, golden age comic Captain Cosmic and the crazy Whackoman!
The magazine can be ordered now in print and digital from £5.99 at www.getmycomics.com/comicscene with enhanced school and library packs with extra comics at https://comicscene.org/comicscene-online-store/ 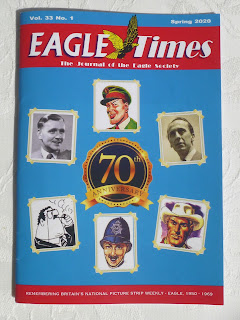 The new EAGLE TIMES is out now. Featuring articles on Dan Dare, Riders of the Range, Cortes -Conqueror of Mexico and the secret wartime adventures of Marcus Morris’ secretary, it is available from Bob Corn at the address opposite.

CONTENTS
Dan Dare -The Evil One   A commentary and review by Will Grenham
Vernon Holding - Chief Executive of Hulton Press   by Richard Sheaf
The Story of EAGLE’s Annuals Part Two   by Joe Hoole
Charles Chilton and the Indian Wars Part Eight  by David Britton
Beth Fetherston WRNS, Marcus Morris’ Secretary   by Jeremy Briggs
Cortes – Conqueror of Mexico   by Steve Winders
Dan Dare Studio Ideas Part Two
The Case of the Unwelcome Guest House Part One – a new Archie Willoughby adventure
The Story of a Train That Went Nowhere   An article about a proposed series about the Canadian Pacific Railway that EAGLE rejected
Tail Pieces   short news items compiled by David Britton
Posted by Jim Duckett at 17:22 No comments: