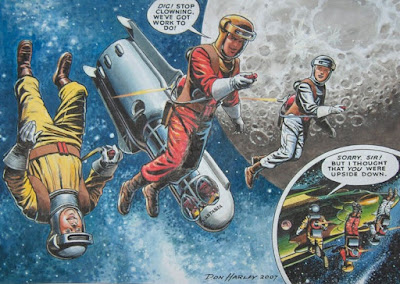 Sadly, Don Harley who was one of the great Dan Dare artists on the original EAGLE has died. Born in London, he attended Epsom College of Art and after hearing a talk by Frank Hampson about Dan Dare and EAGLE in 1951, he applied to join his team. He became Hampson's principal assistant and remained with his studio until 1959, when it was disbanded. Then he assisted Frank Bellamy on the strip for a year, before taking it over himself with another former studio member, Bruce Cornwell. They produced the artwork for the strip until March 1962 and subsequently Don illustrated several Dan Dare strips for EAGLE Annuals. He also drew a 29 part Dan Dare strip for the Sunday People newspaper in 1964, called Mission to the Stars. Like many former EAGLE artists, he worked on TV Century 21 and other comics relating to Gerry Anderson's television series. He drew Thunderbirds, Captain Scarlet, Lady Penelope and a non-television strip The Investigator for TV21, Mark of the Mysterons for Solo comic and the subsequent Mysterons strip for the combined TV Tornado and Solo. In 1971 he drew Thunderbirds for Countdown comic. His later work included Sam for the young children's comic Twinkle and illustrations for information books from various publishers over many years. In 1979 he redrew many opening frames from the Dan Dare adventure  The Man From Nowhere for Dragon's Dream's album reprint of the story. When the 1980s EAGLE brought back the original Dan Dare, Don illustrated a colour strip for the 1991 Dan Dare Annual. He also drew much of Rod Barzilay's Dan Dare story The Phoenix Mission for Spaceship Away magazine, beginning in 2003. He attended several fan events in later life, sharing stories of his time in Frank Hampson's studio and drawing sketches for fans. I was fortunate to meet him on several occasions, including the EAGLE Society Gathering in Southport in 1988, which was the first time he visited EAGLE's birthplace. A most talented artist, he was a modest and unassuming man who will be greatly missed.
A full account of his professional work can be found in the tribute to Don on the Down the Tubes website.
In Memoriam: Dan Dare and Thunderbirds comic artist Donald “Don” Harley – downthetubes.net
Steve Winders 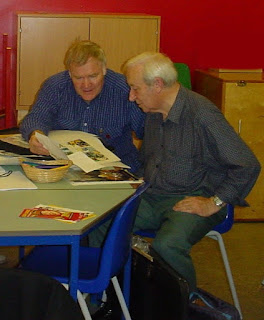 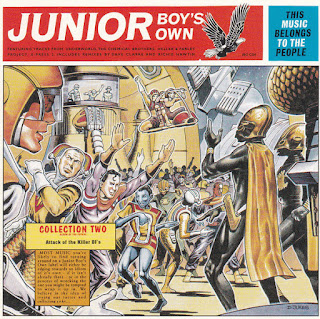 Junior Boy’s Own is a record label launched in 1992, specialising in ‘acid house’ electronic dance music. It has released works by Underworld, Xpress2 and The Chemical Brothers. The above CD cover is for a compilation album, featuring music by all the above groups and P.L.C., The Ballistic Brothers, Sycamore and Dylan Rhymes among others. Of most interest to EAGLE Times readers is the cover of the album, which is clearly ‘heavily inspired’ by the Dan Dare strips The Man from Nowhere and Rogue Planet.  Released in 1997, the CD itself is red with an eagle like the one on its cover and there are pictures of a Crypt and a Phant inside the case. The back cover is also red. The cover reflects the name of the label and not the contents of the CD. As far as I am aware, this is the only album of theirs to adopt a comic themed cover. 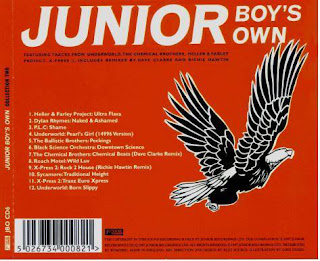 The artist was David Jukes, whose work has ranged from comics (including Roy of the Rovers and Disney Big Time), through newspapers (The Sunday Telegraph), magazines and books to CD and record covers for Sony Records, Arista Records and BMG Records as well as Junior Boy’s Own. He has produced a lot of cartoon art.

The name Junior Boy’s Own has a complicated history. In 1987 a group of Chelsea supporters started a fanzine called Boy’s Own. They were also interested in acid house music and began to cover the scene in the magazine which quickly became the main chronicle for this music. Subsequently they began to organise their own acid house raves. In 1990 they formed Boy’s Own Recordings and in 1992 two of them, Terry Farley and Steven Hall formed Junior Recordings Ltd. which started to use the name Junior Boy’s Own.