The life-story, career and artwork of Frank Hampson, the creator of 'Dan Dare' and artistic creator of the Eagle, are to be revisited by Alastair Crompton in what is described as a "wholly rewritten and updated" version of an earlier biography. The earlier work, written by Alastair, and published by Andrew Skilleter's Who Dares Publishing in 1985, shortly after the death of Frank Hampson, was called The Man Who Drew Tomorrow.
The new book, to be published by PS Publishing to commemorate the 60th anniversary of Eagle's first publication, is titled (appropriately enough) Tomorrow Revisited, and promises us "the complete Frank Hampson story".
It will be a large format "coffee table" book, with over 200 pages of text and illustrations, including full colour reproductions from original 'Dan Dare' artboards (from the apparently extensive collection owned by Paul Stephenson). Also promised are sketches from Frank Hampson's notebooks and some of the many hundreds of photographs that were taken to help create the strip.
The book will come in three editions: 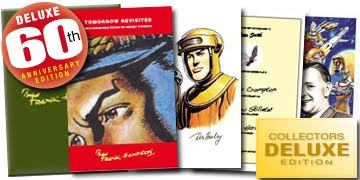 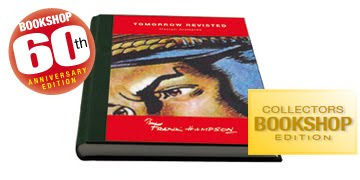 Note: PS Publishing are currently offering a pre-publication discount of 10% off the above prices for orders taken before 30th April 2010. Full details at the PS Publishing website.
More information about Tomorrow Revisited can be found in a two page pdf at Alastair's Frank Hampson website
Posted by Will Grenham at 09:57 No comments: