FRANK HUMPHRIS AND THE BATTLE OF THE LITTLE BIGHORN

A Report by Steve Winders 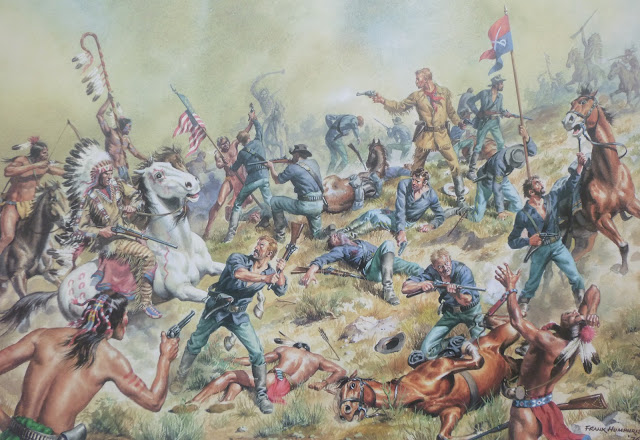 The above picture is a print taken from a painting of Custer's Last Stand at the Battle of the Little Bighorn by Riders of the Range artist Frank Humphris. The original painting hangs in the office of the Custer Battlefield Trading Post opposite the entrance to the battle site in Montana, where prints of the painting can be bought. I visited the Post in 2018 and was shown the original, but was unable to photograph it successfully, due to poor light in the room. Painted in 1976, a century after the battle, it may possibly be the same one included in Frank's Ladybird book Battle of the Little Bighorn (see below), also published in 1976 and  certainly developed from the same template. However there are several minor differences, such as the length of  the mounted chief's headdress on the left, the position of the 'Stars and Stripes' and the faces of some of the characters. 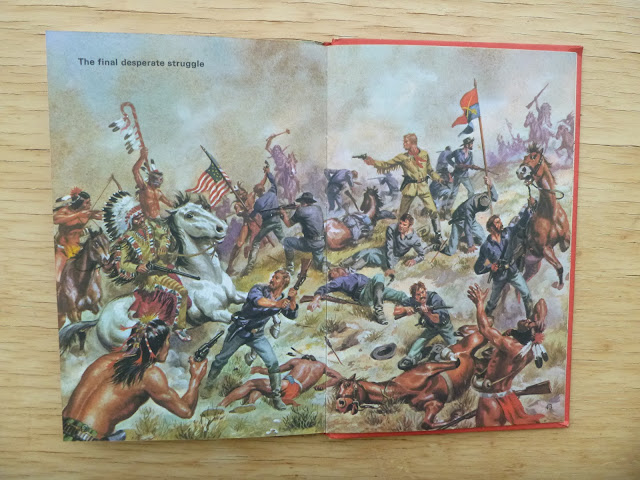 Frank also illustrated a large frame of Custer’s last stand for the Riders of the Range adventure The War with the Sioux in 1957 - 58, but this featured many differences (see below). Members of the Seventh Cavalry were shown with yellow neckerchiefs, white hats and light blue trousers with a yellow seam stripe, as depicted in almost every film that featured the cavalry, but which Frank subsequently discovered were not authentic. He also showed Custer with his famous long hair, but later discovered that he had it cut shortly before the campaign! Consequently his painting and his Ladybird illustrations show him with short hair. Frank coloured the EAGLE strip with inks, which explains the bolder colours. 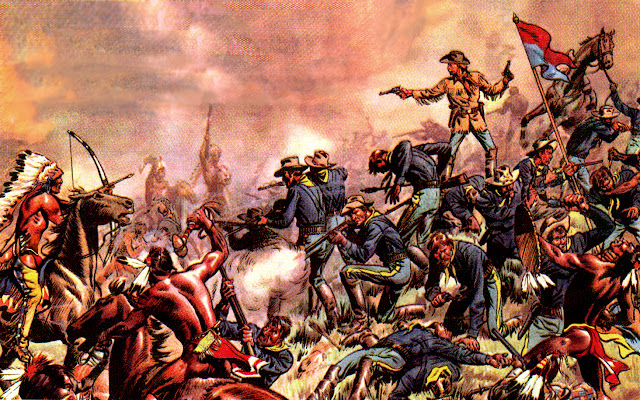 The War with the Sioux was reprinted in a heavily edited version in Wham! Annual for 1972, but to fit the reconstructed page, Frank's scene of the final battle was replaced by one drawn by Frank Hampson for the front page of Swift from 1961. (See below.) 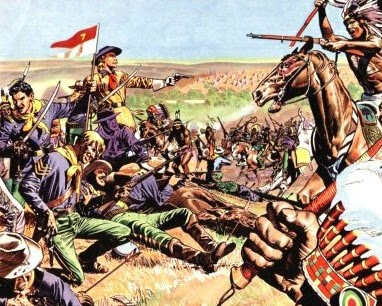 Frank wrote and illustrated the Ladybird book, which was stocked for many years at the Custer Battlefield Museum, about five miles away from the battle site, where many artefacts from the battle are on display and the book was a best seller in their shop.
In 1954, three and a half years before The War with the Sioux appeared in EAGLE, Juvenile Publications produced a full colour Riders of the Range strip album called Jeff Arnold in the Bozeman Trail, written by the strip's creator and regular writer, Charles Chilton, which told a quite different story of Jeff Arnold and Luke's involvement in the events and the battle. This book was illustrated by Pat Williams.
For readers interested in Riders of the Range and the strip's coverage of events in the wars with Native Americans, EAGLE Times is currently running a long series by David Britton which compares the stories with the historical events.
Posted by Jim Duckett at 23:09 No comments:

A tribute by Steve Winders

Congratulations to Rupert Bear who celebrates his hundredth birthday this month. Created six years before Winnie the Pooh, nine years before Tintin, twelve years before Biggles, thirty years before Dan Dare and thirty eight years before Paddington Bear, Rupert was created by Mary Tourtel, who wrote and illustrated his adventures for the Daily Express for fifteen years, before ill health forced her to hand over to Alfred Bestall, who illustrated new stories until  1974. Other artists included Alex Cubie and John Harrold and writers included James Henderson and Ian Robinson. Currently new stories are written and illustrated by Stuart Trotter, although sadly, Rupert now only features in one new story each year, which is included in the Annual alongside repeats of past adventures. The daily strips are also repeats, drawn from the vast library of old stories. Over the years there have been three separate TV series featuring Rupert as well as a song called Rupert and the Frog Chorus by Paul McCartney, with its own animated video. The present Chairman of the Followers of Rupert, John Swan, is also a member of the EAGLE Society. A more surprising link concerns a story called Rupert and the Spaceship, produced in 1954 for a series of small paperback books called the Rupert Adventure Series, in which Rupert flies into space in a ship which bears a strong resemblance to the Kingfisher ship from the first Dan Dare story and several other ships from the strip. Rupert meets a group of friendly aliens who resemble elves and they are led by a character called Meeko! 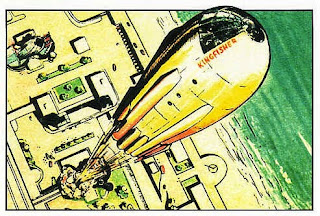 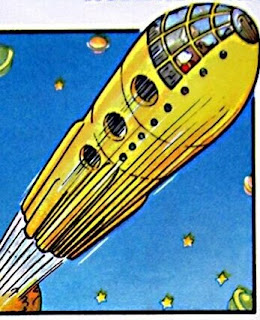