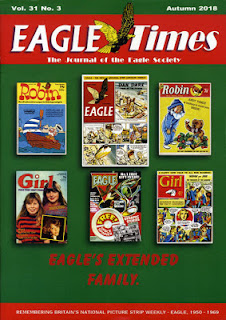 The new EAGLE TIMES is out now and it is a strong, varied and interesting issue.

. EAGLE's Extended Family by Jeremy Briggs
. The Seth and Shorty western strip by Joe Hoole
. Jeremy Briggs' review of A Concise Guide to EAGLE Plastic Kits by David Welsh
. Charles Chilton and the Indian Wars by David Britton
. The Dan Dare adventure The Big City Caper by Andrew Coffey
. Another Glimpse inside the workings of EAGLE by David Britton
. Space Fiction Movies by Will Grenham
. Alfred the Great by Steve Winders
. Another In and Out of the EAGLE by Jim Duckett
. A new Archie Willoughby story: The Case of the Vanishing Police Box by Steve Winders
Posted by Unknown at 16:57 1 comment:

THE MAN WHO DREW DAN DARE 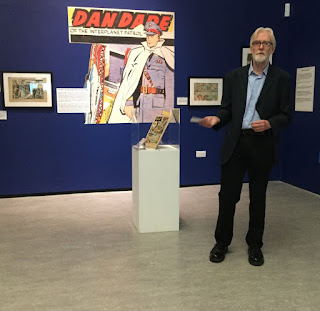 
A reception was held on Thursday evening 20th September at the Atkinson Art Gallery in Lord St. Southport, to launch three new exhibitions that all have a local relevance. The one of particular interest to our readers is dedicated to “The Man Who Drew Dan Dare”, an exhibition marking the 100th Anniversary of the birth of Frank Hampson and his life’s work. The evening was opened by Stephen Whittle, Principal Manager at the Atkinson, who gave a brief background to each of the exhibitions and introduced Peter Hampson as guest speaker for Frank Hampson’s exhibition.

Peter then related the story behind Frank’s career commencing with his demobilisation from the Army and the attendance at Southport College of Art. On leaving the College he was initially involved in producing commercial work for advertising and did illustrations for “Anvil”, Marcus Morris’ local church magazine that was later taken up by the Anglican Church. When Marcus decided to embark on his mission to create a comic or magazine to compete effectively with the gratuitous, pulp comics that were flooding the country from America, setting a higher moral standard yet appealing to children with an exciting product, he collaborated with Frank and EAGLE was born.  Shortly after Jocelyn Thomas, Greta Tomlinson and Joan Porter joined them at the Bakehouse, 22, Botanic Road, Churchtown. The Bakehouse has been restored recently and has a plaque honouring those who worked there in the early days of EAGLE.  Joan remained Frank’s assistant right through to the end.

Peter talked about the move to Epsom, the development of the studio at Bayford Lodge and of the humour that accompanied the hard work and weekly deadlines. That was followed by the unhappy departure from Odham’s , The Road of Courage for EAGLE , working for Ladybird books, more commercial work, such as an advertising strip series for the National Coal Board and finally the North East Surrey College of Technology (NESCOT) where he taught and worked.

The exhibition is really very well laid out and has examples of Frank’s work from the very beginning, with some beautifully executed pencil sketches and work in pen and ink. It continues through the early work on Dan Dare, illustrated by pages from the start of The First Venus Story, later episodes, pencil roughs and ending with post-EAGLE illustration for Ladybird books, a period that Peter described as a very happy one after the trauma of the final years with Odham’s. One of the highlights is some original pages for “The Road of Courage”, which for many represents the pinnacle of Frank’s output. Peter also pointed out the fact that Frank loved to put lots of detail into the background of his frames. This is apparent throughout his work.

The recognition that Frank received in Lucca in 1975 - The Yellow Kid  and his award of the title 'Prestigio Maestro' - the Best Comic Book Artist Since the Second World War, were also on display.

Overall, the evening was a great success, although attendance may have been curtailed by a disastrous night of bad weather, with high winds and very heavy rain, as the tail of Storm Bronagh passed Southport. We were graced however by the presence of Frank’s sister Margaret, currently 91 years of age and her daughter Tina and son-in-law Les, as well as Peter’s wife Sue.

The exhibition runs until 16th March 2019 and is a must for all EAGLE, Dan Dare and Frank Hampson fans.