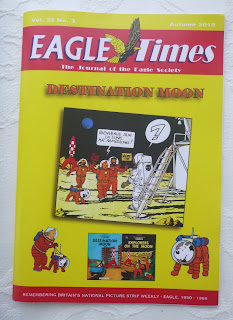 The Autumn edition of EAGLE Times is out now. Tintin appears on the cover and in an article about his Moon adventure inside, which highlights the similarities between Frank Hampson and Herge's working methods. Of interest to readers of the 1980s EAGLE is a feature on the photo strips which were such an important element of the early issues.
IN THIS ISSUE:
*Charles Chilton and the Indian Wars: Part 6 of David Britton's in depth look at the Riders of the Range Adventure The War With the Sioux and the real story of the war.
*Dan Dare Mint and Boxed: A look at the impressive Dan Dare toy collection in the MINT Toy Museum in Singapore.
*Dan Dare Radio: A document from the B.B.C. archives about Radio Luxembourg's Dan Dare radio series.
*The Shell: The Motor Mechanic's Own Strip Cartoon Magazine: A look at an educational comic magazine produced by the Royal Dutch Shell Oil Company in the 1950s with several similarities to EAGLE by Jeremy Briggs.
*Destination Moon: Tintin's Moon Adventure examined by Jim Duckett.
*The Case of the Counterfeit Constable: Part 3 of Steve Winders' latest adventure of Archie Berkeley-Willoughby.
*In and Out of the EAGLE: Another page in the series of short EAGLE related items.
*Smile Please! You're in EAGLE: Steve Winders examines the photo strips from the 1980s EAGLE.
*Tail Pieces: A short piece on the Yugoslavian comic Plavi-Vjesnik which featured Dan Dare.
Posted by Jim Duckett at 12:17 No comments: