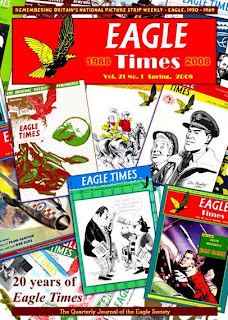 Spring 2008 Contents
With this edition, Eagle Times marks over 20 years of continuous publication - longer than the original publication, Eagle, that we celebrate! The cover features just a few samples of the 80 covers that have preceded this one, from 1988 - 2007.
Posted by Will Grenham at 20:00 3 comments: 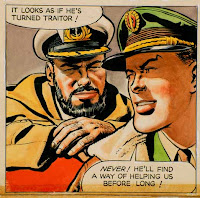 The way Britain reinvented itself as a hi-tech nation after the Second World War is to be revealed in a free exhibition, due to open on 30th April, 2008 at the Science Museum, South Kensington, London. Titled Dan Dare and the Birth of Hi-tech Britain, the exhibition is expected to run until at least October, 2009.
Eagle's space hero, Dan Dare - a fixture in the lives of millions of British children (and their parents!) in the 1950s and 1960s - introduces the exhibition, showing the optimism, faith in technology and spirit of adventure of the times. As Dan Dare is being rediscovered today, there will be a special display of original artwork, merchandise and memorabilia. In case enthusiasts should be wondering, Eagle Times has confirmed with the museum that the artwork on display will include Frank Hampson's Dan Dare murals, commissioned by the Science Museum in 1977, and alongside some original artboards from the 1950s/60s Eagle (the latter were acquired by the museum in the 1990s). 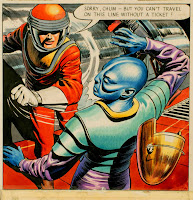 The official press release states that:

Dan Dare and the Birth of Hi-tech Britain will capture the essence of those pivotal post-war years, showing how Britain took striking wartime advances like the jet engine, radar and penicillin to create new industries. This was a time when the state rolled out huge new projects for a free nationwide health service, nuclear power, supersonic flight and a radical rehousing programme - major developments which created a revolution in national affairs and personal life.

The free exhibition also looks at the reinvention of the home, the emerging importance of design and the arrival of previously unheard of consumer goods. It will show that the period, from 1945-1970, started the long climb from austerity to affluence and laid the foundations for the Britain of today.

The signature exhibit representing hi-tech is the Bloodhound missile. Seven metres long, with fins, two ramjet engines and four booster rockets, Bloodhound was one pillar of Britain's defence against Soviet threat in the Cold War. Reaching speeds of Mach 2 (about 1,500 mph) in four seconds, it surpassed anything produced by the US. Also on display will be the British-built 'Bomb' - the WE177 nuclear weapon - Britain's ticket to the top table of nations.

Some of the finest examples of British manufacturing of the time will be shown. These include iconic products from designers such as Gordon Russell, Abram Games, the man behind the iconic Festival of Britain poster, and Pye radios designed by Robin Day. It will show, moreover, a 'lost world' of British manufacturing - a time when many people's first TV was a Murphy, not a Sony!

Further details about the exhibition can be read in the full press release on the Museum's website.
The two examples of Dan Dare original artwork shown above are from:
'Reign of the Robots' (Eagle Volume 8 No 17, 26 April, 1957)
'Platinum Planet' (Eagle Volume 12 No 43, 28 October 1961)
Thanks to the Museum's Press Officer, Richard Purnell, for allowing us to include them here.
Dan Dare is © The Dan Dare Corporation Ltd.
Posted by Will Grenham at 15:00 No comments: 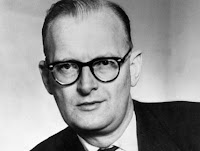 Arthur C. Clarke, the writer and visionary, a former Chairman of the British Interplanetary Society, has died, three months after celebrating his 90th birthday.
Born on 16th December, 1917, in Minehead, Somerset, Arthur Clarke was the eldest of four children. Before leaving school he joined the British Interplanetary Society, which had been founded in 1933. During the Second World War, he served in the RAF as a radar specialist. Afterwards he attended Kings College, London, graduating in 1948 with first-class honours in physics and mathematics.

In 1945 he sold a short story called ‘Rescue Party’ to Astounding Science Fiction, and began his science fiction writing career. In 1947, ten years before the launch of the first artificial satellite, he wrote a technical paper, published in Wireless World, demonstrating the feasibility of using artificial satellites as relay stations for radio communications. The “geostationary orbit” now used by numerous communications satellites, has since been designated the “Clarke Orbit” by the International Astronomical Union.

It was around this time that he wrote a story ‘The Fires Within’ that would later appear in Eagle, under the pseudonym Charles Willis. Arthur Clarke’s contribution to the early days of Eagle and ‘Dan Dare’, for which he was for a time scientific advisor, was marked here on the occasion of his 90th birthday. It may have been small in the overall scheme of his life, but that association is remembered affectionately and respectfully here.

Arthur Clarke became a prolific writer of fact and fiction, with almost 100 books to his name; books such as The Exploration of Space, Childhood’s End, The Sands of Mars, 2001: A Space Odyssey and Rendezvous with Rama. The novel 2001: A Space Odyssey resulted from four years collaboration with the film director Stanley Kubrick, with whom he shared the credit for the movie screenplay. 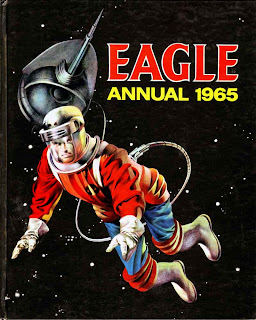 Walt Howarth, who has just died, aged 80, was born on 1st January 1928 in Bolton, Lancashire. His talent for drawing faces was noticed at 4 years of age, and at 13 he was offered a scholarship at Bolton Art School, where he studied for three years. His first professional work was for the cover of Bolton's Salute to the Soldier Week programme in 1946. An avid fan of Bolton Wanderers Football Club, soon Walt was drawing their programme covers and getting five shillings a time for caricatures of the players.
A prolific (if largely unsung) artist, the majority of his work was (via Industrial Art Services) for World Distributors Ltd, whose annuals will be remembered for their distinctive yellow spines. From 1950-1959 he painted six John Wayne Annuals and seventy-seven John Wayne Comic covers, plus for the annuals, illustrations to text stories, endpapers, title/contents pages, and the odd feature or game/quiz page. 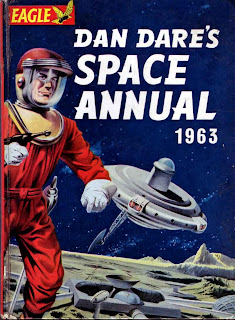 Some of his other work (of particular interest to Eagle Society members) included the box art for the 'Merit' Dan Dare Cosmic Ray Gun (produced by J & L Randall in about 1953), and most possibly for other Eagle-related toys of that era. In the 1960s he painted the covers for Dan Dare's Space Annual 1963, and for Eagle Annual 1965.

Of more general interest, he was also responsible for the cover illustrations of the first two Doctor Who Annuals.

An illustrated article, 'Walt Howarth' by Derek Wilson was published in Eagle Times Volume 18 No 3 (Autumn 2005), and gives more details of Walt's career. It can be read at the Gateway site, where it was posted in March, 2006.
Other internet sites reporting the death and and paying tribute to Walt Howarth:
Posted by Will Grenham at 22:00 No comments: