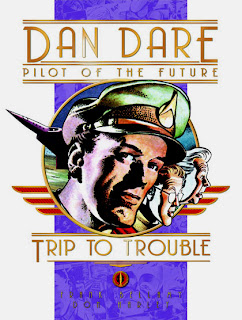 Trip to Trouble is the thirteenth in the Titan Books series of reprints of 'Dan Dare' from the original Eagle magazine. The volume contains four 'Dan Dare' adventures, two from Eagle in 1959-1960 and two which first appeared in Eagle Annual in 1957 and 1958.
The title story, 'Trip to Trouble', continues directly from 'Terra Nova' (which appears along with 'Safari in Space' in Titan's previous volume, which I reviewed on 19th December 2009) and thus concludes the trilogy that began with 'Safari in Space'. 'Terra Nova' ends on a cliff-hanger as Dan has a bright idea that will put him back on the trail of his missing father. Here, in 'Trip to Trouble', he continues the quest, along with Digby and Lex O'Malley, travelling across Terra Nova by raft to Lantor, where he intervenes in a war between the Lantorites and the invaders from Gaz, finally learns the fate of his father and is able to return home.
'Trip to Trouble' was an appropriate title, in light of the editorial changes happening at Eagle when it was first published, and although 'Project Nimbus' followed it there was more than just a break in the continuity of storyline. Readers of Eagle were surprised when the issue for 19th March 1960 took a new look (and a price hike). The Eagle masthead had been changed and the world of 'Dan Dare' had been totally redesigned by Frank Bellamy (under editorial orders). Although some of Dan's Spacefleet colleagues were still around everything else had changed - architecture, uniforms, spacecraft - with no explanation for the reader! Some time before, the Eagle's new executive had decided on a revamp of Eagle and its lead strip. They called for the story arc started by Frank Hampson in 'Safari in Space' to be wound up. Without Hampson, the story had already diverted from the path in which he might have taken it, and it is unlikely Hampson would have brought his characters back to the Solar system so soon.
In 'Project Nimbus', Dan has returned to Earth - and a very different Spacefleet - from where he is soon heading into space in the Nimbus Two in search of Nimbus One, a protoype photon-drive spaceship that has mysteriously disappeared on its maiden voyage. This leads him and Digby, Hank Hogan and Pierre Lafayette to the moons of Jupiter and an encounter with non-humanoid aliens.
Frank Bellamy had taken over from Frank Hampson as lead artist during 'Terra Nova', and continued to work "with" the remaining studio team members, who included Don Harley, Keith Watson and Gerald Palmer along with Eric Eden, who provided the script. Palmer is not credited on the title page, although he remained with the team for 'Terra Nova' and most, if not all, of 'Project Nimbus'. I believe Watson departed somewhat earlier in 1960, around the end of 'Trip to Trouble'(?), when he went off to draw 'Captain Condor' for Lion. Throughout his one-year tenure as lead artist, Bellamy produced about 50% of the boards himself, and the rest were produced separately by the rest of the team under his general direction.
Under the new editorial management, and without Hampson's creative input, the 'Dan Dare' stories became much less epic in scope. So the two Eagle stories included in Trip to Trouble only fill about two-thirds of the volume. To fill the remainder, Titan have included two 'Dan Dare' stories from Eagle Annual. Both are from the time when Hampson was still working on 'Dan Dare'. The first, 'Space Race', is from Eagle Annual No. 7 and was drawn by Desmond Walduck, presumably from roughs provided by Hampson or members of his studio team. 'Operation Moss' is from Eagle Annual No. 8 and visually is so much better, being a "Frank Hampson Production" drawn by Frank Hampson and Don Harley. It is in my view the best of the annual strips, and shows Hampsom and Harley at their collaborative best.
An addition to the book is a text article by Jeremy Briggs, 'Dan Dare's Solar System', which reflects on the differences between Dan Dare's imaginary universe and what has been revealed about the solar system since the 1950s by real space probes.
I note that I pre-ordered Dan Dare: Trip to Trouble from Amazon over a year ago, soon after the publication of Dan Dare: Safari in Space. I believe the publication date was put back (possibly twice), although the reason for the delay is unclear. If it was to make sure of the quality, then it was worth the wait. Like the previous volume, the artwork, although inevitably reproduced from printed copies of Eagle (rather than from original artwork) benefits again from the loving restoration of Des Shaw (of the Spaceship Away team).
Let's hope in these austere times that this series continues, and Titan can complete the whole series of strips from Eagle. The previous venture by Hawk Books was spoilt by missing out a large portion of the strips that appeared in the 1960s.
Posted by Will Grenham at 18:28 1 comment: