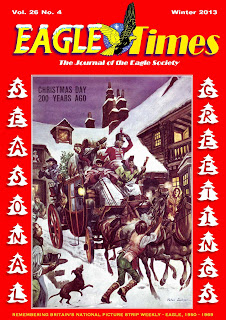 The cover artwork for this issue of Eagle Times is by Peter Jackson
Posted by Will Grenham at 19:23 No comments: 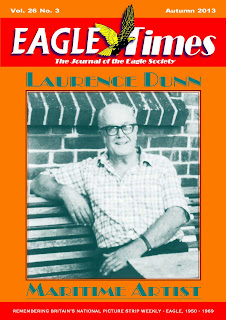 
Eagle Days were the idea of the late Bob Rothwell. The purpose is to meet with fellow Eaglers and collectors, to chat, swap, buy and sell spare EAGLE and other comic-related items - and generally have a good time. Following last year's Eagle Day at Great Staughton, its host, Clive O'Dell, has decided to repeat the honours at the same venue.

The day will include talks on EAGLE-related subjects and a chance to look at displays of EAGLE/comic-related items.
Light refreshments will be available.

Single entry £3 - in advance or pay on the door.

Bring your spare EAGLE/comic items.
Book a table in the hall for £5.

Free parking is available nearby (entrance is past the two houses to the right of the hall,
near the bend in the road)

Posted by Will Grenham at 21:50 No comments: 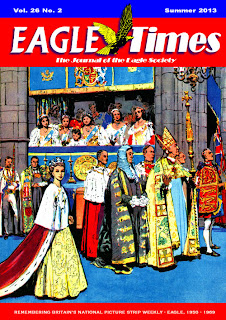 The cover picture of this issue of Eagle Times is from Eagle, 22nd May, 1953. Although we know his first name is Gordon, the artist is unknown, as his surname is unclear from the signature. (Possibly it is Norres?)
Posted by Will Grenham at 00:00 No comments: 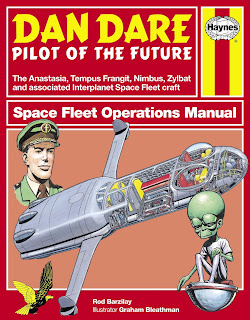 A nice surprise, when I got back from holiday the other day, was to find waiting for me a review copy of this new book from Haynes Publishers.

Written by long-time Dan Dare fan (and Eagle Society member) Rod Barzilay, and beautifully illustrated with cutaways by Graham Bleathman, the Dan Dare Space Fleet Operations Manual takes a detailed look at (and inside) the spaceships, space stations and various other craft that played such a huge part in bringing the excitement of space travel to Dan Dare stories through the 1950s and 1960s.

Published on 6th June, 2013, the book harks back to those earlier times when, every week, British schoolboys (and their Dads, not to mention a few Mums and sisters!) thrilled to the space adventures of Dan Dare (The) Pilot of the Future, as told in comic-strip form in the pages of Eagle. The creation of Frank Hampson, Dan Dare's adventures ran for nearly 20 years in Eagle (over 9 of them under Frank Hampson's direction) and the character name has resurfaced several times since, not always in the full spirit of the original, but testimony enough to Frank Hampson's and Dan Dare's enduring legacy. As well as from the original series in Eagle, the author has pulled into the timeline of Space Fleet history relevant episodes from, Eagle Annual  ABC Film Review, Dan Dare Annual, Dan Dare's Spacebook, the Sunday People newspaper strip, "new" Eagle, and his own Spaceship Away magazine, which since 2003 has been publishing Dan Dare stories in (or close to) the style of the Eagle original. Some of the cutaways included in this book have previously appeared there. 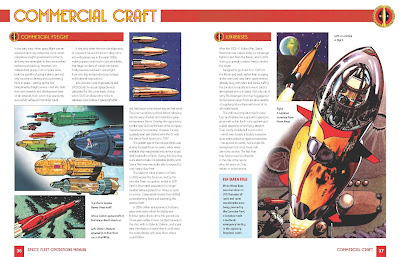 Part of what made the stories so compelling, memorable and influential in their hey-day, was the extent to which Hampson, his studio team and their sympathetic successors created a believable future universe in which to place the stories: new worlds, new technologies, new civilisations; fauna, flora, friends and foes. Since the stories were projected some fifty years forward from the end of the Second World War, readers of the strip today will notice that the real world has diverged from the future envisaged then for Dan Dare, and that world can now be be seen as an alternate reality from our own - one in which Britain took a leading role in the development of space exploration, where the United Nations supported an effective World Government, and an Interplanet Space Fleet combined international resources from countries such as Britain, the USA and France to explore space and defend the Earth from external threats. 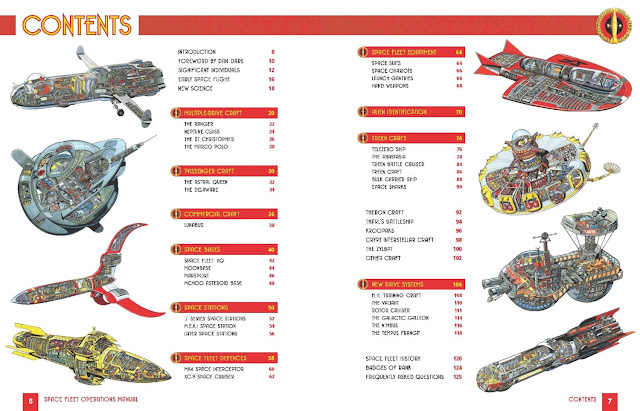 Following a brief introduction from its author, the book treats the world of Dan Dare as fact, Interplanet Space Fleet having "commissioned Haynes to produce the Dan Dare Space Fleet Operations Manual  for its personnel, cadets and those interested in the part it has played from our first steps into space to the exploration of the solar system and beyond". The contents feature: 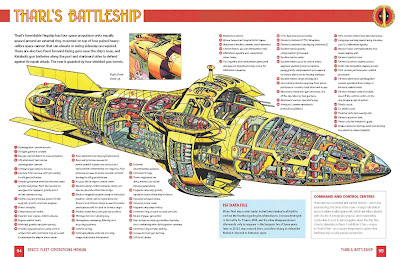 The Author, Rod Barzilay, as did most of us in the Eagle Society, grew up with Dan Dare and Eagle magazine and is a lifelong enthusiast. In 2003 he launched Spaceship Away magazine, which along with other sci-fi stories, has for 10 years (three issues per year) featured new Dan Dare stories, illustrated in the original style, and designed to fit within the original Dan Dare timeline. Graham Bleathman is an illustrator famous for his detailed cutaway drawings, particularly those associated with Gerry Anderson series, such as Thunderbirds and Captain Scarlet, and two Wallace & Gromit Cracking Contraptions Manuals.

Fully authorised by the Dan Dare Corporation Limited, this Haynes Manual joins a number of other space fiction oriented manuals from Haynes - including manuals for Thunderbirds (also illustrated by Graham Bleathman), Star Wars Millenium Falcon, and the USS Enterprise from Star Trek. It is a wonderful addition to any library of books about Eagle and Dan Dare, or for that matter the broader subject of cult science fiction series, and would make an ideal companion to sit alongside the Titan Books reprints of the original Classic Dan Dare series. Unfortunately the Titan run seems to have stalled with Trip to Trouble, which appeared in January, 2011.

For other reviews of Dan Dare Space Fleet Operations Manual, see:
Down the Tubes also has a interviews with

Dan Dare Space Fleet Operations Manual by Rod Barzilay, illustrated by Graham Bleathman, ISBN 978 85733 286 8, is published by Haynes Publications at £16.99. Well worth the money, but at the time of this review, it can be ordered from amazon.co.uk at £10.87

Posted by Will Grenham at 21:45 No comments:

The cover of this issue celebrates 25 years of Eagle Times and incorporates the front cover of our first issue (Spring 1988) alongside a study, by John Burns, of Dan Dare's companion, Digby.
Posted by Will Grenham at 23:03 2 comments:

Charles (Frederick William) Chilton, MBE, the renowned BBC radio producer and writer, best known to Eagle readers as the scriptwriter of ‘Riders of the Range’ and the author and producer of the BBC radio serial Journey into Space, died on 2nd January, 2013, aged 95.

Charles was born into poverty on 15th June, 1917 and was raised by his grandmother in King's Cross, London. He joined the BBC as a messenger at the age of 15, soon becoming an assistant (or as he described it in his autobiography, "assistant to the assistant"!) in the BBC’s gramophone library. By the age of 18 he had moved into radio presentation and production. He developed a passion for jazz and presented many music programmes including ‘Swing Time’ and ‘Radio Rhythm Club’. His first major radio production was Alastair Cook’s ‘I Hear America Singing’.

During the Second World War, he served with the RAF as a radio instructor before being transferred to Armed Forces radio. In Ceylon (now Sri Lanka) he ran the forces radio station with David Jacobs. After the war he returned to London and (following his divorce from an earlier unsuccessful marriage) he married Penny, a BBC secretary. In 1949 he created and produced a popular weekly BBC radio show called Riders of the Range, which was described as "a musical Western drama".

When in 1950 the Editor of Eagle, Marcus Morris, obtained permission from the BBC for a comic-strip version of Riders of the Range, Charles took on the writing of the weekly strip, too. He continued to write and produce the radio show until 1953 and to write the scripts for Eagle’s ‘Riders of the Range’ strip and scripts and stories for numerous Riders of the Range and Eagle annuals, into the early 1960s. He also wrote the script for ‘Flying Cloud’, a western strip that appeared in Girl. As the comic strip ‘Riders of the Range’ developed, Charles became an expert on the Wild West and introduced authentic historic western stories into the series. He also wrote historical accounts of the West, such as The Book of the West (Odhams, 1961) which, after publication in America, earned him The Western Heritage Award for Juvenile Books in 1963.

When Riders of the Range finished on radio (1953) Charles was tasked by the BBC with creating a science fiction series, though he then new nothing of the subject. The result was the hugely successful Journey into Space, featuring spaceman Jet Morgan and his crew (Doc, Mitch and Lemmy), which ran to three series (totalling 58 episodes) all of which he wrote and produced between 1953 and 1955. Journey into Space was among the last radio programmes to attract audiences greater in number than television. The series' subsequent transformation to book and comic strip form under his own authorship assured Chilton’s international recognition. His research for the series led to him becoming a keen amateur astronomer. Among his other radio production credits in the fifties are a several editions of The Goon Show in 1953, 1957 and 1958.

In 1962 Charles Chilton wrote and produced a radio musical based on World War 1 songs, called The Long, Long Road. In 1963 this was transformed through his collaboration with Joan Littlewood's Theatre Workshop into the stage production: Oh! What a Lovely War, which then (in 1969) was turned into a film by writer Len Deighton and director Richard Attenborough.

The books were published as limited edition hardbacks but are now available in paperback.