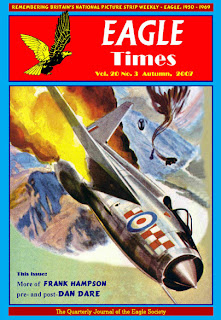 Posted by Will Grenham at 11:28 No comments:

As this is a new blog, for those not in the know (apologies to those who are!), a few words about the EAGLE, Eagle Society and Eagle Times may be in order.

EAGLE was a British boys' magazine, created and originally edited by the Revd. Marcus Morris. It was published weekly from 1950 until 1969, initially by Hulton Press. EAGLE is probably best known for the picture strip that for most of its history appeared on the front cover and inside front page: Dan Dare - Pilot of the Future. Dan Dare was created by artist Frank Hampson. However, EAGLE also contained many other strips, stories, articles and features that warrant its description as a magazine, rather than a comic.

The Eagle Society is a worldwide, though relatively small, collection of individuals, many of whom were readers of the original EAGLE, or have been attracted to its content more recently, for one reason or another. For those who grew up with it, there are many reasons for remembering EAGLE: strips such as PC49, Luck of the Legion, Jeff Arnold, Jack o'Lantern, or Storm Nelson; text stories such as The Three J's or Rex Milligan; the Cutaway Drawings; the factual articles, Nature, Sport, Historical or Religious strips.