Eagle Annual -the Best of the 1960s comic (review) 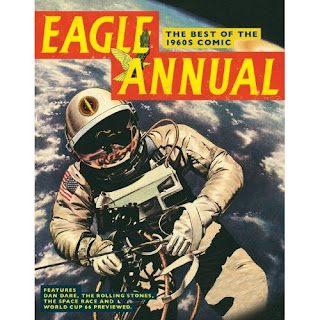 Just published by Orion Books is the latest in their Eagle Annual nostalgia series, which began two years ago with Eagle Annual - the Best of the 1950s Comic (see Steve Winders' review at Bear Alley), and was followed last year by the Eagle Annual of the Cutaways (see eagle-times' previous review). This year's offering is Eagle Annual - the Best of the 1960s Comic. Compared with Eagle Annual - the Best of the 1950s, the price has increased from £12.99 to £14.99 (the same as the Eagle Annual of the Cutaways), though (in this case) the page count has increased, from 176 to 192. As before the books are edited by, and have an introduction by, Daniel Tatarsky.
As Tatarsky says in his introduction, Eagle's creator and first editor Marcus Morris chose to include only selections up to 1962 in his The Best of Eagle, which was published in 1977, for reasons Tatarsky speculates were "more to do with his absence after that date than any genuine feelings about the output under his replacement". While I would agree that much of Eagle's content in the years following Morris' departure could appropriately be included under a "Best of" title, much should not. Many Eagle readers gave up the original Eagle in the mid-sixties as the quality declined following the buy-out of Hulton Press and the later takeover by IPC. There is some good material presented in this book, covering 1960 to 1969, but, not surprisingly, the majority of the content is from the first half of the decade, rather than the last.
Starting with a sympathetic two page introduction, the book proper begins with the first front cover from 1960 (2nd January, 1960 Volume 11 No 1), which as Tatarsky points out, was the last attributed to Hulton Press due to the buy-out by Odhams. After this date the former Hultons became Longacre Press. By then Frank Bellamy was drawing 'Dan Dare', and a full page of his 'Trip to Trouble' artwork is seen. The book closes with the "Great News, Pals!" advertisement that appeared in the last issue of Eagle on 26th April 1969, announcing the "merger" with Lion. In between, the main content consists of various sample pages, articles and "clippings" from Eagle's last decade, presented in almost, but something less than, chronological order. As with the Best of the 1950s, many of the items have no indication of the dates on which they were published, making the book not very useful as a reference volume - but then reference is not its intended purpose.
The format is similar to the previous offerings - ie slightly larger than the traditional Eagle Annual dimensions - but the dull matte finish, and "cloth" spine used previously has been eschewed, appropriately, for a glossy cover more reminiscent of the later 1960s Eagle Annual covers. Where the previous offerings provided an overtly "distressed" look, outwardly at least this effect has been toned down, and the book should look more appealing in the bookshop displays. Unfortunately opening the book reveals a continuation of the "dirty page" approach that has been criticised previously (not just here!) in connection with the earlier volumes. If anything the effect is worse in this book, as even full pages of the original magazine have been trimmed and set within this grubby looking background. The editor provides occasional commentary within the book. It is an unfortunate feature that some of the commentary is superimposed over the original content!
All that said, the book has a lot to recommend it. Take a look. If you weren't put off before, then you should enjoy this book just as much as the first. Lets us know what you think.
As I write, the book can be obtained from Amazon.co.uk for £8.99
Posted by Will Grenham at 10:44