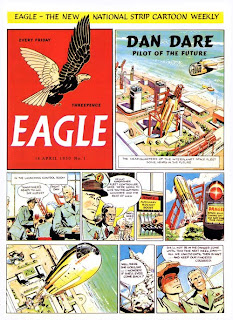 Sixty years ago, on 14th April, 1950, Hulton Press launched a revolutionary new paper for children (aimed at boys, but many girls read it too). The Eagle magazine was a new concept in juvenile publishing and its combination of four-colour photogravure and black-and-white pages presented a mix of fictional and factual material, in both picture-strip and textual form. Eagle was published weekly from 1950 until 1969, and is best known for the picture strip that for much of its history appeared on the front and inside-front pages: 'Dan Dare - Pilot of the Future', created for the Eagle by writer and artist Frank Hampson.
Edited by Marcus Morris, Eagle was destined so to brighten, and in some cases inspire, the lives of children in austere post-World War II Britain that, 60 years on, it is still fondly remembered. The fondness of our memory and our inspiration derive from the ideals and hard work of its creators, which provided a quality of writing and artistry, and a range of content, that surpassed that available in other juvenile publications of the time. Our earlier post Eagle - How it began provides a short introduction to the subject.
As the Eagle Society celebrates the 60th Anniversary of Eagle (in Southport where it all began) it is time to remember the debt we owe to the creators of Eagle, principally its first Editor the Revd. Marcus Morris and its lead artist Frank Hampson, but also the many other contributors (editors, artists and writers) who through their work (and often over-work), inspired Eagle's readers - some to be artists, some to be writers, others to be scientists, engineers, pilots or sportsmen. Though many of Eagle's contributors are no longer with us to hear it, we still say "Thank you".
Posted by Will Grenham at 00:01

I commissioned a free Dan Dare online game to commemorate this milestone, and it includes a credits link to this excellent blog - hopefully it will help spread the "Dan Dare" word to some new would-be fans.

Happy Birthday Eagle and Dan!
Thank you Marcus, Frank and all the gang.

Hello friends,
Please ask a question. How many pages of Heros the Spartan Frank Bellamy drew for the magazine Eagle?
In that issue of the magazine appeared?
Thank you for your kind attention.
Regards,
Jorge

Can I add that we should also take a moment to thank the enthusiastic fans who have carried the torch up to the 21st Century, especially the Eagle Society members! Thanks to you all

I am in the process of making a video of the 6oth anniversary, in 4 parts. The first two parts are now available in YouTube (And also in Facebook
PART 1
http://www.youtube.com/watch?v=PYwVO0vzkiE

Part two is all music! Very little Eagle content, except from the people who were there! LOL

Phil, thanks for the videos. Hopefully I'll be able to embed the videos and provide provide some direct links from the blog next time I post.

Not as interesting as the other 3 but if you want to know what went on on the last day this is it.

HOLA DON JORGE
Bellamy drew 4 stories which were made up of 95 episodes!