IN AND OUT OF THE EAGLE 3

The first character created for EAGLE to feature in a television series was Anthony Buckeridge's Rex Milligan, who appeared in a series of six plays on BBC television in 1956, repeated in 1957. Buckeridge's more famous creation Jennings also appeared on television, but the character was not created for EAGLE. In 1957, John Ryan's Captain Pugwash, who ironically had not proved popular in the weekly, first appeared on BBC television, with the most recent new series being produced in 1998 and a live action film now being planned! 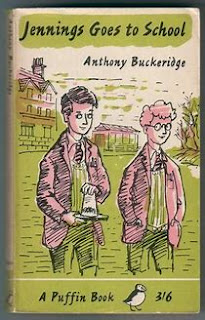 Another television series that emerged from EAGLE was Peter Ling's popular school text serials about The Three 'J' s, which were made by the ITV company Associated Rediffusion in 1958, when Peter was Head of Children's Serials. Two serials were broadcast in fortnightly episodes. They were Trouble at Northbrook, which lasted five episodes and Northbrook Holiday, which ran for six. Unfortunately neither of these serials survive.

Many readers will recall seeing Dan Dare in a CGI series on Channel Five in 2002. Originally produced by Netter Digital, who went bankrupt during production, the series was completed by Foundation Imaging. There were several unsuccessful attempts to produce a live action Dan Dare series, but Dan and Digby, played by Niven Boyd and Jimmy Yule were featured in several TV advertisements for Mobil Oil in 1987.
Posted by Unknown at 22:43