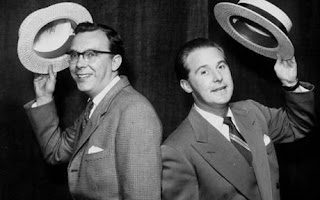 The late lamented comedy double act Morecambe and Wise have an unusual connection to Eagle’s 1961 - 62 strip Danger Unlimited. The strip was written by ‘Steve Alen’ whose real name was Leonard Fincham and who in 1954 co-wrote Running Wild, the very first TV series starring the pair. Another contributor to this show was Denis Gifford, the comic historian. Unfortunately the series was a disaster and put Morecambe and Wise off television for several years. However Leonard Fincham had several more successful TV writing credits including single episodes of The Avengers, The Invisible Man and the Police drama No Hiding Place and six episodes of Interpol Calling, for which he was also story editor.  Danger Unlimited, which ran for 29 episodes was not his only work for Eagle. He also wrote text stories under the pseudonym Lee Mayne, notably the Special Agent serials about Interpol Inspector Jean Collet, alias ‘the Hawk’.