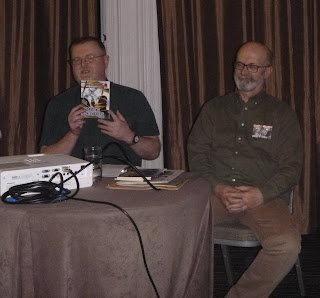 This year's annual gathering was held at the Doubletree by Hilton Hotel in Dundee. Twenty six members attended the successful event which was organised by Eric Summers, ably assisted by Jeremy Briggs. Guests included Chris Murray, Professor of Comics at the University of Dundee, Calum Laird, the former editor of Commando magazine and Ian Kennedy, the celebrated Dan Dare artist on the new EAGLE. Members visited Captain Scott's Antarctic Survey Ship Discovery and other landmarks in the city, such as the new Victoria and Albert Museum, the McManus Gallery and the various statues of comic characters around the city. We are grateful for the generosity of the publishers D.C. Thomson and Co. who provided items for the Welcome Packs. A full report by Reg Hoare will appear in the next EAGLE TIMES. The picture above shows Jeremy Briggs interviewing Calum Laird and the picture below shows Ian Kennedy with interviewer Phillip Vaughan. 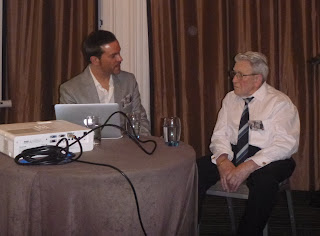