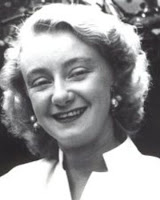 Greta Edwards (nee Tomlinson) was born in Burnley Lancashire. She studied at Burnley Art School and the Slade School of Fine Art in Oxford and London, graduating in 1949. Seeking work, she applied for a job advertised in the Advertisers Journal which proved to be working for Frank Hampson’s studio on EAGLE which was then still in development. She recalled the studio in a newspaper interview:

“It was very basic, a flagstone floor and a tin roof; there was cold running water in the corner. It was freezing cold in the Winter and boiling hot in the Summer…..I went for an interview and saw the bakehouse, saw Frank’s work on the board and just thought it was fantastic! Just wonderful! And I felt, I’ve just got to have this job.” 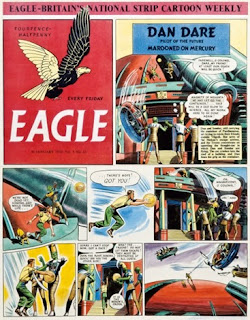 She was taken on and originally paid £4 10s .a week. Initially based in an old lean-to bakehouse in Churchtown, Southport, Hampson’s small team produced Dan Dare, Rob Conway, Tommy Walls and The Great Adventurer (about the life of St. Paul) for the early issues of the forthcoming weekly. As a figure artist, Greta originally drew figures which Frank Hampson would then use to develop the characters, but as this was a long process, photo reference began to be used and in addition to her other work on the strips, Greta became the model for the principal female character, Professor Peabody. As Dan Dare became a success the other strips were dropped or taken over by other artists and the team concentrated on Dan Dare. Greta worked closely with Harold Johns, Hampson’s chief assistant and in 1952, when Hampson became ill, she and Johns produced the art for the Dan Dare adventure Marooned on Mercury. They also produced the art for several Dan Dare strips in EAGLE Annuals, notably The Double Headed Eagle which appeared in the third annual, published in 1953.

Unfortunately, in 1953, Greta and Harold Johns were sacked from Hampson’s team after taking on other work, despite having been given permission to do so by EAGLE’s editor Marcus Morris. Nevertheless, Greta had the fondest memories of Frank and her work on Dan Dare. She moved on to work as a fashion artist and later worked for an advertising agency in London, producing storyboards for television commercials for products including Lucozade and Collier’s suits, before her marriage to Richard Edwards, who worked for BP. She moved to Iraq with him, where she continued to draw and paint. Their only child, Francesca was born in Baghdad. The family later spent time in Iran and Kuwait, where she also painted and exhibited her work. They returned to Britain in 1969 and settled in Haslemere, Surrey. After painting in oils for many years, she changed to water colours, later experimenting with adding inks and pastel to the water colours, before moving on to acrylics and collage, while using oils for smaller paintings and portraits. The Atkinson Arts Centre in Southport has several of her works in its collection. There are also private collections of her work in Australia, America, Italy, Kuwait and Mallorca.

I met Greta on several occasions as she attended many events relating to Dan Dare and EAGLE. I first met her briefly when she was a guest at Eaglecon '80 in London - the first event organised by fans to celebrate EAGLE. A decade later in 1990, she attended the official opening of the Dan Dare Exhibition which was held at the Atkinson Arts Centre in Southport, when I was able to chat to her at some length and found her approachable and eager to talk about the early days of Dan Dare. Also in 1990, she unveiled a commemorative plaque on the wall of the Old Bakehouse in Churchtown, where it all began. I met her again at Southport in 2000, when she attended the unveiling of a Dan Dare bust at the entrance to the Cambridge Arcade on Lord Street and also the EAGLE Society Gathering which was held that weekend. Once again she was most happy to talk to fans. Finally, I met her again two years later at a special event held at Bristol's City Museum and Art Gallery's Dan Dare Exhibition, which she attended with another Dan Dare artist, Don Harley and we spoke at some length about her work on Dan Dare and her own artistic techniques. That year, along with Don and another Dan Dare artist, Keith Watson, she showed EAGLE Society members around Bayford Lodge in Epsom, where the Dan Dare team were based after leaving Churchtown. 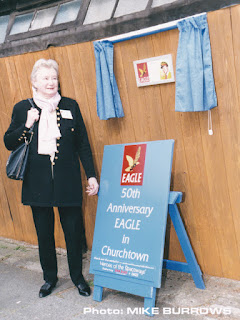 Greta was also happy to answer questions and contribute memories of working in Frank Hampson’s studio to articles for EAGLE Times, television programmes and to several books, including Tomorrow Revisited by Alastair Crompton, Living With Eagles by Sally Morris and Jan Hallwood and Dan Dare, Pilot of the Future – A Biography by Daniel Tatarsky. Her fondness for her time on the early EAGLE is apparent from her appearance in a 1990 television programme Future Perfect when she was shown revisiting the Old Bakehouse. After recalling happy memories of her time working there with Frank and the rest of the team, she was suddenly overcome with emotion at the experience and asked the director to cut.

She will be greatly missed by her family, friends and her many fans.