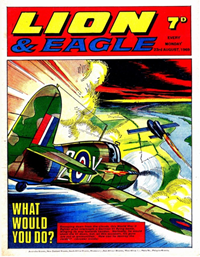 When EAGLE was absorbed into Lion in 1969, Dan Dare was joined by three other strips from EAGLE in the combined comic. These three were all recent arrivals in EAGLE, specially created for the merger. However, the front cover featured What Would You Do? which had also run on the front page of Boys' World,  the paper that EAGLE itself had taken over in 1964. The pictures were redrawn for Lion and the text was reduced and simplified, but they were exactly the same problems for readers to solve that had featured in Boys' World. 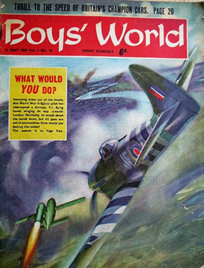 Writers who worked on both included Tom Tully, Ken Mennell, Edward Cowan, David Motton and Willie Paterson and the papers were both edited by Bob Bartholomew. There is evidence that the EAGLE and Boys' World merger was hurried and therefore enforced from above by the controlling Mirror Group. Nearly all the strips were in mid story when the merger took place and the combined paper briefly included eight colour pages to accommodate the already coloured Wrath of the Gods. The sixties EAGLE and Boys' World had both carried six colour pages and when Wrath of the Gods ended in EAGLE six episodes later, this situation was resumed.
Posted by Jim Duckett at 12:37

Email ThisBlogThis!Share to TwitterShare to FacebookShare to Pinterest
Labels: Boys' World, Lion, Wrath of the Gods.