In 1986, twenty one years before Virgin Comics launched their seven part series of Dan Dare comics by Garth Ennis and Gary Erskine, Virgin Games created a Dan Dare: Pilot of the Future video game for the ZX Spectrum, Amstrad CPC and Commodore 64 home computer systems, with the Commodore 64 version being significantly different in gameplay from the other two, although based on the same premise. Virgin's interest in Dan Dare comes from the company's founder Richard Branson, who was an EAGLE reader in his boyhood and is a keen Dan Dare fan. In the game, the Mekon threatens to destroy the Earth with a huge hollowed out asteroid unless our leaders submit to his terms. Dan and Digby journey to the asteroid in Anastasia and realise it is inhabited when they see artificially built structures there. Dan enters the asteroid to fight the Mekon and his Treen followers and to face a number of tasks. In the Spectrum and Amstrad versions he is armed with a laser gun and has to pass through levels collecting five pieces of an explosive device, with each piece enabling him to move on to the next. Dangers include armed Treens and floor and wall guns. If he is shot, Dan loses energy and if that reaches zero, he is captured and put in a cell. Although he then escapes, the cell is some distance from the key parts of the complex and this causes a time loss. If Dan runs out of time before he can assemble the five parts, then the Mekon wins.

Dan is unarmed in the Commodore 64 version. He has to combat his Treen assailants with his fists. Accompanied by Stripey, Digby's pet, he must first travel through the asteroid's surface and subterranean lakes, solving various puzzles and collecting items that will allow him to enter the Mekon's base. Here he must fight Treen guards and free a captured Digby and Professor Peabody before destroying three computers with a giant laser. Finally he fights the Mekon in a grenade battle and on defeating him, he has two minutes to return to his ship, the Anastasia before the base explodes. This version of the game takes place in half an hour of real time. 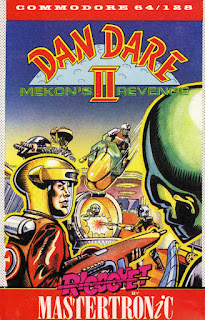 Both versions of the game proved highly popular and were praised for their graphics and the challenges they posed for players. In 1986, Dan Dare's adventures were appearing weekly in the new version of EAGLE, although their hero was the great great grandson of the original, so the character was familiar to young gamers. The success of the game, which reached number two in the U.K. sales chart spawned two sequels, Dan Dare II - The Mekon's Revenge and Dan Dare III - The Escape, but these were not as well received, with reviewers widely considering them to be no improvement on the original.