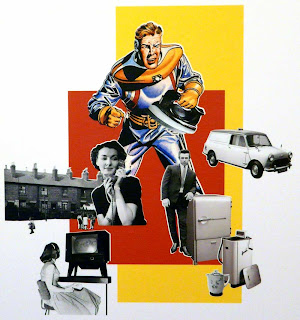 So, does Dan Dare do the ironing - or does he have more pressing engagements?
I was amused by this graphic of Dan Dare while attending the press preview of the 'Dan Dare and the Birth of Hi-tech Britain' Exhibition (which is open at the Science Museum in South Kensington until November, 2009).

For its time, the 'Dan Dare' strip was forward looking, socially as well as technologically, anticipating the further emancipation of women: Jocelyn Peabody never fitted the classic "dumb female" stereotype of hero fiction - she was a scientist, a space pilot too, definitely not there just to scream and be rescued. I'm not sure I ever expected to see Dan with an iron in his hand, though, unless it was for playing golf - on the moon or elsewhere!

But what of the exhibition? Well, I can assure you that it's well worth a visit. That applies not only to fans of the original Eagle and their contemporaries, but to anyone who wants to know more about the development of technology in Britain between 1945 and 1970, and the impact on home life of design and innovation in those "Eagle times".

There are three sections. The first, as you enter, focusses on 'Dan Dare', and tells in brief how Eagle and Dan Dare came into being, how the 'Dan Dare' strip was produced, and some of the merchandise that was available to children of the 1950s. 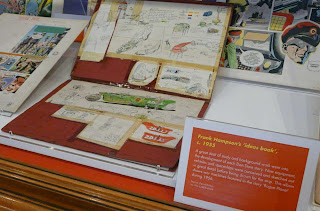 Highlights of this section include artist Frank Hampson's 'Dan Dare' murals, which were originally commissioned by the museum in the 1970s, and two cabinets, one of which includes some examples of original 'Dan Dare' artwork plus one of Frank Hampson's "ideas books" used when he was planning the alien technology that would appear (in 1956) in the 'Dan Dare' strip 'Rogue Planet'.

The other cabinet displays other the 'Dan Dare'-related memorabilia: the 'Dan Dare': Stamp Album, Card Game, Radio Station, Construction game, etc. To anyone who attended the major Eagle exhibitions in Southport in 1990 and 2000 (Eagle's 40th and 50th anniversaries), this aspect of the display might appear more modest, but this exhibition is not just about 'Dan Dare'. 'Dan Dare' is used as a symbol of the times, a model for the optimism of Britain, its faith in technology in the post-war years, and a lead-in to the rest of the exhibition.

The "signature exhibit", providing a bridge to the technology, through another Eagle link, is a Bristol Bloodhound air defence missile, a pillar of UK's defence against the Soviet threat between 1958 and 1964. Reminding us that Eagle was not just a comic, a reproduction of Leslie Ashwell Wood's cutaway drawing of the Bloodhound (from Eagle Vol 10 No 5) is also on display.

Having set the theme, the second part of the exhibition is 'Building a New Britain' and covers everything from the creation of the National Health Service to the investments of government in nuclear power and the atom bomb. The third part looks at the reinvention of the home, the merging importance of design and the impact on everyday life with the arrival of previously unheard of consumer goods. Arguably, more use of Eagle imagery might have been used in these sections. For example, the section featuring the Dounreay nuclear research station might have, but did not, include L. Ashwell Wood's cutaway (from Eagle, 18th October, 1957). Several other examples, occur to me, where Eagle imagery could have been exploited. Seeing a section of the upper fuselage of the De Haviland Comet 1 aircraft that crashed in 1954, I was reminded that the Comet had featured as 'The First Four-Jet Airliner in the World' in Eagle's 4th issue. The Festival of Britain coverage could have used Lawrence Dunn's cutaway of the Dome of Discovery, or L. Ashwell Wood's cutaway of the (3-D) Telecinema. The WE177 air launched nuclear bomb, which entered service in 1966, never featured in Eagle, however, as it was on the top secret list!

While you're there, take a look elsewhere in the museum. On the ground floor in the permanent exhibition you'll find four more original 'Dan Dare' artboards. Nearby, you'll find a V2 rocket, like those which, as he watched them rise into the sky over the Scheldt Estuary in the closing stages of World War II, inspired Frank Hampson (though in Antwerp, at the receiving end) to dream of space travel.

What an excellent report on the exhibition,and fuslome account of
the press comments. The Museum's Press Office must've worked overtime, and you've been brilliant with the number of useful links.
David Britton and I went to the Museum the day before you, for the official launch. Peter Hampson said a few words, and you ahve him linked-in. Sue Hampson and Margaret were also there. Myself I found the link beytween DD and the fifties/sixties a
tad unrealistic. The exhibition, although fascinating, is not (in my view) for kids. However the Museum itself fascinates kids. Perhaps they could just pop into the DD bit, and them go elsewhere. Incidentally, which DD boards are featured in the entrance? Alastair

Thanks, Alastair.
Peter and Sue Hampson were there for the press preview, too. I met them on doorstep at 9.30am, waiting to get in! The interviews that appear on the BBC website were recorded while I was there.

To find the Dan Dare boards that I referred to (on the ground floor), from the main entrance go forwards past the bookstore, through the 'Exploring Space' and, before you get to the Imax, they are on the left in, I think, the section called 'Making the Modern World'. The boards featured there are from Eagles Vol 1 No 14, page 1; Vol 2 No 9, page 2; Vol 2 No 14, page 1; and Vol 4 No 32, page 2.

I have added a few further links to the post.

New link added to British satellite News video. Thanks to Peter Hampson for the info.