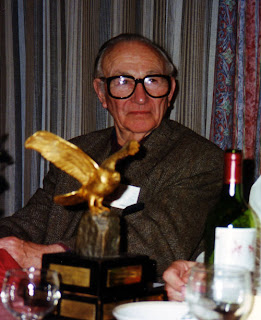 Charles (Frederick William) Chilton, MBE, is best known to Eagle readers as the scriptwriter of ‘Riders of the Range’ and the author and producer of the classic 1950s BBC radio serial ‘Journey into Space’.
Charles’ father was killed, at the age of 18, at Arras in the so-called Great War, so Charles never knew him, and he was born into poverty in Sandwich Street, King’s Cross, London. His mother died in the post-war flu epidemic when he was about 6, and afterwards he was raised by his grandmother. He left school at the age of 14 and, after an unrewarding “apprenticeship” with an electrical sign-maker, at 15 he joined the BBC as a messenger. The BBC sponsored day and evening classes, and he developed a life-time appetite for self-education. At 16, he became an assistant in the BBC’s gramophone library. By the age of 18 he had moved into radio presentation and production. He developed a passion for jazz, forming the BBC Boys’ Jazz Band in 1937. He presented many music programmes including ‘Swing Time’, and ‘Radio Rhythm Club’. His first major production was Alastair Cook’s ‘I Hear America Singing’.

During the Second World War, although initially a conscientious objector, he enlisted with the RAF, and served three years as a radio trainer before being transferred to Armed Forces radio. In Ceylon (now Sri Lanka) he ran the forces radio station with David Jacobs. After the war he returned to the BBC in London and met and married Penny, a secretary at the BBC. In 1949 he created and produced a popular weekly radio show called ‘Riders of the Range’.

In 1950 the Editor of Eagle, Marcus Morris, sought and obtained permission from the BBC for a comic-strip version of ‘Riders of the Range’. In October that year Morris sponsored a trip by Chilton to Arizona. Chilton’s account of the trip was published in Eagle as a series of articles called ‘Ticket to Tombstone’. His third article was followed the next week by the appearance of ‘Riders of the Range’ (featuring Jeff Arnold and the 6T6 Outfit) in comic-strip format, drawn initially by Jack Daniel. Chilton continued to write and produce the radio show until its demise in 1953, and to write the scripts for Eagle’s ‘Riders of the Range’ strip and the scripts and stories for numerous ‘Riders of the Range’ and Eagle annuals, into the early 1960s. He also wrote the script for ‘Flying Cloud’, a western strip that appeared in Girl and he is credited with some writing for Swift Annual. As the comic strip ‘Riders of the Range’ developed, helped by Penny with the research, he became an expert on the Wild West and introduced authentic historic western stories into the series. He also wrote historical accounts of the West, such as The Book of the West (Odhams, 1961) which, after publication in America, earned him The Western Heritage Award for Juvenile Books in 1963.

When ‘Riders of the Range’ finished on radio Charles Chilton was tasked by the BBC with creating a science fiction series. The result was the hugely successful ‘Journey into Space”, and he wrote and produced three series (58 episodes) between 1953 and 1955 with a repeat production of the first story ‘Operation Luna’ broadcast in 1958. The hugely successful radio serials and their subsequent translation to book and comic strip form under his own authorship assured Chilton’s international recognition. Among his other radio production credits in the fifties are a several editions of ‘The Goon Show’ in 1953, 1957 and 1958.

In 1962 Charles Chilton wrote and produced a radio musical based on World War 1 songs, called ‘The Long, Long Road’. In 1963 this was transformed through his collaboration with Joan Littlewood and the Theatre Workshop into the stage production: ‘Oh! What a Lovely War’, and in 1969 was turned into a film by writer Len Deighton and director Richard Attenborough.

The picture shows Charles as an honoured guest of the Eagle Society at Bath, in 1995. Also present for the weekend was the first Eagle 'Riders of the Range' artist, Jack Daniel.
Eagle articles:
Eagle strips (writer):


Note: In Eagle 'Riders of the Range' consists of 23 stories, which are told over 576 episodes.The vast majority are written by Chilton, although some episodes may be by another, as they are not credited.

Note: In addition to the above, from 1951 Juvenile Productions Ltd published a series of Charles Chilton's Riders of the Range Annual. Juvenile also published a Jeff Arnold in The Bozeman Trail picture strip book. When the Juvenile annuals finished, Hulton Press followed on with six Eagle Riders of the Range Annuals, the last being for 1962. All were written by Charles Chilton, who also wrote a serial 'Jeff Arnold and the Battle of Quitman Creek', which appeared monthly in the ABC Film Review in 1953.