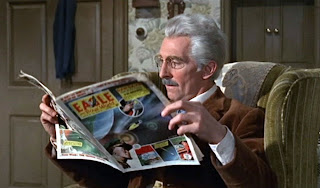 Towards the end of 1963, in the second story of the new television series Doctor Who, the Doctor and his companions travel to Skaro where they meet the Daleks for the first time. So successful was the series, and this particular story, that it spawned a movie adaptation: Doctor Who and the Daleks. Peter Cushing was chosen to play "Doctor Who" (as he was named in the film), along with Roy Castle, Jennie Linden and Roberta Tovey as Ian, Barbara and Susan, respectively.
The opening scene pans around Doctor Who's living room (in the film he is an eccentric human professor). His granddaughter, Susan, is reading 'Physics for the Inquiring Mind' and Barbara is seen reading 'The Science Of Science'. As the camera pans to Doctor Who, we see that he is reading ... a copy of Eagle and Boys' World! He has the comic open, apparently at 'Heros the Spartan' (drawn by Frank Bellamy) on the centre pages - clearly he liked a bit of fantasy! - but presumably he has already read 'Dan Dare, Pilot of the Future', which is prominently on view on the front and back covers. The issue date can clearly be identified from Keith Watson's artwork from 'The Moonsleepers' adventure: it is the issue dated 20th March 1965 - most probably the current issue at the time of filming, as the movie had its UK premiere on 26th June.

More about this on the Frank Bellamy Checklist site.
Posted by Will Grenham at 19:48