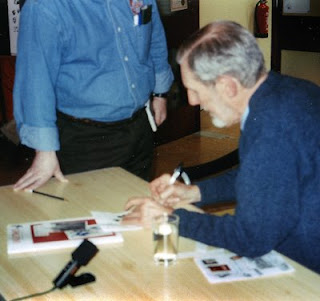 Peter (George Derek) Ling was born on May 7th 1926 at Thornton Heath, near Croydon, Surrey. For education, he attended the Winterbourne Elementary School, followed by the Whitgift School at Haling Park, South Croydon. He soon developed a passion for English composition, and at the age of 14 he had an article published in Good Housekeeping, the first step in a distinguished and varied writing career.

“Called up” as a Bevin Boy during the Second World War, he went to work in a Derbyshire coal mine but after three months, due to ill-health, he was transferred to the Army Pay Corps. After the war he was diagnosed with tuberculosis, and spent about 2½ years in a British Legion Sanatorium. His first novel, Voices Offstage, was published in 1947. Deciding to try his luck as a gag-writer, he sent in some sample scripts to various BBC radio comedians, with the result that Jon Pertwee turned up in person to encourage him to write material for his radio show, Waterlogged Spa. In 1950, Peter began to write comedy material for television. A children’s magazine programme called Whirligig was broadcast every other Saturday, and included a serial, celebrity guests, with comedy links provided by Humphrey Lestocq and ‘Mr Turnip’. Peter wrote all their material.

In 1952, when introduced (by Goons creator, Jimmy Grafton) to Eagle Editor’s assistant Ellen Vincent, Peter jumped at the chance to write a schoolboy serial for Eagle. The first ‘Three J’s’ story, set in Northbrook School, a setting broadly based on Whitgift School, appeared in 1953, with 32 text serials published over the next six years, wonderfully spot-illustrated by Peter Kay. In addition to writing the ‘Three J’s’ stories in Eagle, Peter Ling also wrote ‘Three Js’ stories in five Eagle Annuals, and an Eagle novel: The Three J’s and the Pride of Northbrook. In 1958 he adapted the Three J's for television. Trouble at Northbrook consisted of five 5 fortnightly episodes and was followed by another 6-part adventure called Northbrook Holiday. Unfortunately no recordings of the serials are known to exist. In 1954 Peter had married Sheilah Potts, an actress and writer who had appeared in Whirligig, and who used the professional name Sheilah Ward. They collaborated on some serials for Girl: 'Two Pairs of Skates' (1956-57) and 'Penny Starr' (1957), plus a Girl novel: Angela has Wings (1960).

He also turned his hand to songwriting and one song, Why Not Now performed by Matt Monro, made it into the charts in 1961. That same year, Peter helped Hazel Adair to develop Compact, a television soap opera set in the offices of a women’s magazine. They co-wrote the series, which appeared on BBC twice-weekly from the beginning of 1962 until the Summer of 1965. They also wrote the Compact Annual which was published in 1963 “by arrangement with the BBC”. Their professional partnership continued when, in 1964, they co-created Crossroads, another soap opera, this one set in a motel. The highly popular Crossroads ran for 24 years (despite its reputation for “wobbly sets”!), and a total of around 4,500 programmes were broadcast before its final show in 1988. Initially the series was shown only on Central and Southern ITV but it was networked nationally from 1972. Although Hazel Adair left Crossroads after the first year, Peter remained as a writer until 1987, when a new producer decided he wanted to write his own stories.

Among Peter Ling’s many writing credits for television are episodes of Dixon of Dock Green, Sexton Blake, No Hiding Place, The Avengers and Doctor Who. His contribution to Doctor Who was the serial ‘The Mind Robber’ (1968, starring Patrick Troughton) for which he also later wrote the Target novelization (1986). He also wrote many radio dramas, including adaptations of Sherlock Holmes stories, the Arnold Bennett story , and John Dickson Carr’s Doctor Gideon Fell detective stories, and (in 1969) he originated the BBC radio soap opera Waggoners’ Walk, which replaced Mrs Dale's Diary, and ran for 11 years, until 1980. In the 1980s and into the mid-1990s, he wrote novels under his own name, including the 'Crown House' and 'Watermen' trilogies, plus Halfway to Heaven and Happy Tomorrow. He also wrote a number of "bodice ripper" romances under the pseudonym “Petra Lee”.

In his later years Peter produced and directed plays for his local theatre, The Stables, in Hastings, East Sussex. His wife Sheilah, who latterly published as Sheilah Ward Ling, died in 1997. They had four children.

The Eagle Society was pleased when Peter agreed to be interviewed in 1998, and that Peter consequently agreed to come along as an invited guest for the Eagle Weekend at Pinner in 1999. In his later years Peter fought bravely against Alzheimer's disease. He died on September 14th 2006.

ET Refs:
The picture shows Peter Ling signing autographs at the Eagle Weekend in 1999.
Posted by Will Grenham at 23:17

The information about Crossroads initially appearing only in the Central and Southern ITV regions (this information also appeared in The Times) is inaccurate. Anglia TV showed the serial from 1964 onwards, and so did ATV. I'm not sure how many other regions showed Crossroads back. Most ITV regions picked it up in the mid-1960s, but Granada, fearing a threat to Coronation Street, held out until 1972.

Noele Gordon was voted TV Personality of the Year by TV Times readers in 1969.

Andy, thanks for the correction.
Will.