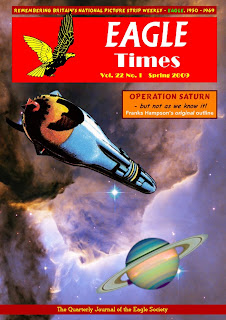 Spring 2009 contents
This issue's front cover features the Valiant spaceship from 'Operation Saturn' (EAGLE, 1953)
superimposed with images of Saturn and the Eagle Nebula (NASA photographs) .
Posted by Will Grenham at 11:30