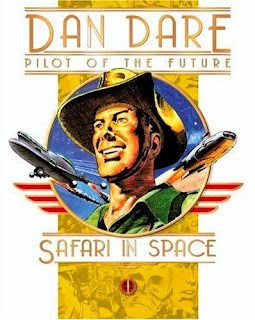 Safari in Space, the twelfth volume in Titan Books' Dan Dare Pilot of the Future series, collects the two 'Dan Dare' adventures 'Safari in Space' and its follow-on, 'Terra Nova'. The scripts are credited to Alan Stranks, Frank Hampson and Eric Eden. The stories first appeared in Eagle in 1959 and mark the 'Dan Dare' swansong for the artist Frank Hampson, and the 'Dan Dare' debut for the artist Frank Bellamy. Other artists on the strip included Joan Porter (who left at the same time as Hampson) and the remaining members of the Dan Dare Studio team (Don Harley, Eric Eden, Keith Watson and Gerald Palmer) who continued to draw about 50% of the pages under Bellamy's general instruction.
After arriving on Venus for a photographic safari, Dan Dare with his companions are abducted to the secret asteroid base of Scottish scientist/engineer Galileo McHoo. Informed that Dan's father who disappeared years ago was the pilot of an experimental spacecraft that set out for a new world, light-years away, Dan and Co. are induced to join McHoo's expedition to find out what happened to the earlier expedition, and to try to discover the fate of Dan's father. On Terra Nova the expedition finds evidence of Dan's father's earlier presence, and help one of the inhabitant populations, the Novads, to combat the Nagrabs, a species of giant man-eating ants which is threatening their existence.
The book is the first to be issued since John Freeman took over editorship of the series. If you've seen any of the previous volumes you will know that the quality of reproduction has been variable - hence the apologia carried in the front of the books:

"Much of the comic strip material used by Titan in this edition is exceedingly rare. As such we hope that readers appreciate that the quality of the material can be variable."

The apologia remains in this book but is, in my view, superfluous. The reproduction quality is consistently excellent throughout. The provision of the comic strip pages from the original Eagle is credited to Des Shaw of the Spaceship Away team. It shows what can be achieved when someone takes the care to obtain the best available source material, and then apply sensitive restoration. The pages look pristine - you might think some were from original artwork, rather than 50 year old comics, though it probably helps that the format is smaller than the original, as this will have had the effect of sharpening the images.
In format the book follows the pattern of the earlier books in the series, with 'Safari in Space' beginning on a right hand page. As the original stories appeared in Eagle on the front and second pages, this is consistent with how the material was originally presented in that publication. However, with a single page separating the two stories 'Terra Nova', possibly controversially, begins on a left hand page. This results in each week's two-page episode being shown on facing pages. It's possible some people might not like this. My personal view is that it is better presented this way. Somehow the Eagle quarter-page masthead, which inevitably is reproduced every other page, seems less intrusive. It gives a freshness to the presentation, allowing each episode to be viewed as a whole (as it has never been before), and it leaves the cliff-hanger ("What will happen in next week's episode?") at the turn of the page.
In addition to the two 'Dan Dare' stories, the book contains 'Dan Dare Abroad', an illustrated text article by Eagle-timer Richard Sheaf, reviewing the history of Eagle's and Dan Dare's syndication and reproduction in periodicals outside of UK .
All in all a splendid publication, and out just in time for Christmas!
Posted by Will Grenham at 12:00