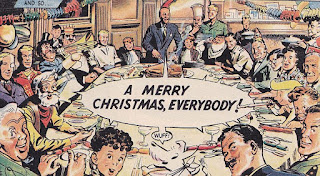 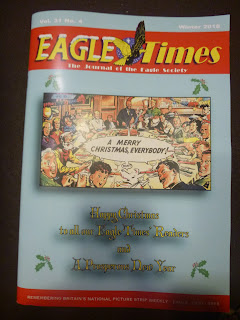 The new EAGLE Times is now available and it's another varied and interesting read. With articles about both the original 1950s weekly and the revived 1980s version, there are also features about science fiction films and the final part of our Archie Berkeley-Willoughby mystery The Case of the Vanishing Police Box.

LOOK OUT FOR:
. Dundee Folk by Eric Summers. An article about the    location of our next EAGLE Gathering.
. EAGLE'S Data Files by Jeremy Briggs. A piece on the new EAGLE's version of the famous Cutaway Drawings.
. Drawing the Data Files. An interview with artist Lionel Jeans by Jeremy Briggs.
. Alfred the Great. Part Two of Steve Winders' examination of this strip from 1953 -54.
. The Ghosts of Christmas Crossovers by Jim Duckett. A look  at crossovers in and out of EAGLE.
. Charles Chilton and the Indian Wars. Part Three of David  Britton's examination of the wars with the Sioux and Cheyenne in the 1876 campaign in Montana and South Dakota and how they were covered in EAGLE's 'Riders of the Range' strip.
. David Britton's report on the launch of the Frank Hampson Centenary Exhibition at the Atkinson
Arts Centre, Southport.
. Space Fiction Movies in EAGLE's Times. The eighth and final part of Will Grenham's series
on science fiction films.
. The Case of the Vanishing Police Box. Part Two of Steve Winders' story about the former PC
49, who is now a plain clothes detective.