Biographies of Dan Dare state that he was educated at Rossall School near Fleetwood in Lancashire. Founded in 1844 as a sister school to Marlborough College, which had been founded the previous year, Rossall has produced several famous old boys. These include Leslie Charteris, the creator of The Saint, Sir Thomas Beecham, who founded both the London Philharmonic and the Royal Philharmonic Orchestras, the Booker Prize winning novelist J.G. Farrell, James Donald the famous film actor, Walter Clopton Wingfield who invented lawn tennis, Sir Francis Graham Smith, the former Astronomer Royal and Fr. Thomas Byles, the priest who refused to leave the sinking Titanic, insisting on remaining to help and console fellow passengers.

Rossall was possibly chosen as Dan’s school in tribute to another old Rossallian, Terence Horsley, the editor of the Sunday Empire News, who was about to publish Frank and Marcus Morris’ Lex Christian strip when he died in a glider accident. His death prompted Marcus to create a whole comic weekly instead of a single newspaper strip and Frank to develop the East End Vicar Lex Christian into Dan Dare.

Most appropriately, in view of its most famous fictional old boy, the school houses the Lawrence House Astronomy and Space Science Centre, which includes an observatory and planetarium. Opened in 2006, the Centre resulted from efforts by parents and Governors to restore an old established observatory in the school. Since the 1990s Rossall has been co-educational and now includes a nursery and preparatory school, catering for children from ages 2 - 18. 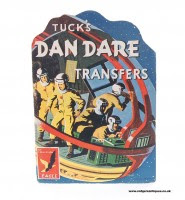 Rossall was never identified as Dan’s old school in the strip. He visited his school in The Double Headed Eagle story in Eagle Annual Number Three but it was not named. The information originally appeared in Raphael Tuck’s ‘Happy Hours’ series book of Dan Dare Water Transfers produced in 1951. This book included twelve pages detailing Dan’s career, interleaved with six pages of colour water transfers. It is likely, but not certain, that the information was provided by Frank Hampson, but we can take it as official because in a radio interview in the late 1970s Frank himself told listeners that Dan had attended Rossall and the information was also repeated in the text accompanying the 1955 Presso Dan Dare Spaceship, the 1974 Dan Dare Annual and the Dan Dare Dossier in 1990, although the Dossier incorrectly stated that Rossall is in Manchester! 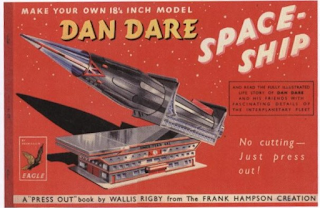 (When this page first appeared in EAGLE Times I mistakenly believed that the information about Rossall originally came from The Calvert’s Toothpowder Dan Dare Picture Card album. However I am grateful to Charles Evans-Gunther, Adrian Perkins and David Gould for their correction and their work on tracking the origins of Dan’s background details.)