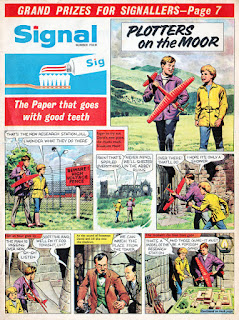 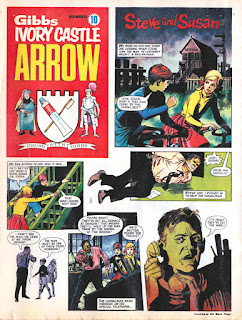 Published between 1961 and ’63 was Signal comic, a free publication to promote the toothpaste of the same name. As far as I have been able to discover, the comic ran to just five issues and was supplied to dentists and chemists to give to their young customers. Clearly inspired by the layout of the original EAGLE, its cover strip was illustrated by Don Harley and it also included strips drawn by Pat Williams and John Ryan.
Printed in photogravure, it contained a mix of strips and educational features. It was printed on smaller paper than EAGLE and contained just eight pages, but it was a real comic with quality contents. In 1963 it was replaced by Gibbs Ivory Castle Arrow, a similar publication, which ran for eleven issues until 1966 and was produced by EAGLE’s publisher Odhams. Edited by George Beal, John M. Burns drew the cover strip, which was written by Keith Chapman and John Ryan also contributed a regular strip.