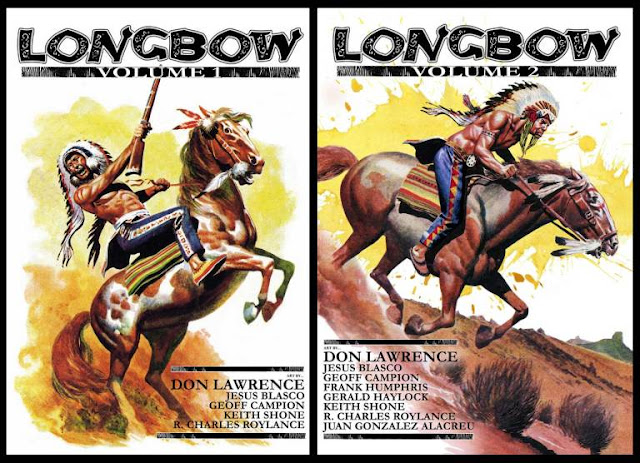 Steve Holland has published two volumes of reprint strips from Swift weekly through his Bear Alley Books. They feature one of EAGLE's most popular characters from the 1960s. So who's Longbow?? You'll know him better as Blackbow, for to avoid any hint of confusion over ownership of the character who appeared in two different comics now owned by two different companies, he's been renamed for this collection. Blackbow's adventures in Swift  are owned by Look and Learn, but his stories in EAGLE aren't and Steve Holland's got permission for the Swift strips. This isn't the first time that Blackbow's changed his name. Way back in 1953 he was created as Strongbow the Mohawk for Comet weekly, but as the highly informative introduction tells us, this makes the origin story of a boy who falls from a wagon heading west in the 1840s and is raised by the Mohawks, historically and geographically nonsense, because the Mohawks were originally from New York State and long before the 1840s they'd moved to Canada, having backed the British in the War of Independence. When publishers the Mirror Group got their hands on EAGLE and Swift in 1961, they sent in their hatchet men to save money. Comet's old Strongbow strip was picked up for Swift, but became Blackbow the Cheyenne to make it historically credible. The strip was completely redrawn for Swift, but many of the old Strongbow stories were reused at first, before brand new adventures took over. The original stories were by Mike Butterworth and he probably wrote the new ones too.

The strips from Swift were all in black and white and each instalment was a self contained adventure, most of which ran for three pages. Each volume contains thirty seven Longbow stories and ten half page information features about the Cheyenne and other Native American peoples, also from Swift. They also include biographies of all the twelve artists whose work is featured in the strips. These include Don Lawrence and Jesus Blasco, as well as EAGLE favourites Gerald Haylock, Martin Salvador and Frank Humphris, who would take over the strip when it moved into EAGLE and became a colour serial. The Swift stories were quite different from the later EAGLE adventures in other ways. For a start they were straightforward western stories whereas EAGLE brought in supernatural elements like man eating plants. EAGLE's version also distinguished more clearly between Blackbow and his European American alter ego, Doctor Jim Barnaby, where the character only assumed his Blackbow identity when he was wearing Cheyenne dress. In Swift he speaks as Blackbow in his Jim Barnaby clothes immediately prior to changing. A minor difference, but the EAGLE approach works better. The second volume has an introduction by Steve Winders, which outlines Blackbow's time in EAGLE.

You'll find some entertaining stories and some impressive black and white art in these books and old EAGLE readers who disliked the supernatural and fantasy elements of the sixties weekly, may well prefer these stories to the later ones. The books are softback and run to 137 and 140 pages, with colour covers by Don Lawrence. These are two good books which deserve to be widely read. You can currently buy both for £29.68 including postage and packing as a special introductory offer, but they're also available separately. Full details from    www.bearalleybooks.blogspot.com